The Magpie Bridge is my first cover story–for Issue #66 of Andromeda Spaceways Magazine. ASM is an Aussie-based magazine for speculative fiction. Love the gorgeous cover artwork! The short story was inspired by one of the oldest Chinese fairytales in the world,牛郎织女, one that would be familiar to many Asian kids. Some places still celebrate Qixi/Qiqiao festival in their name. Hope everyone enjoys the story, available for purchase here (x) along with a selection of other works of fiction. And again, I can’t get over this beautiful cover: 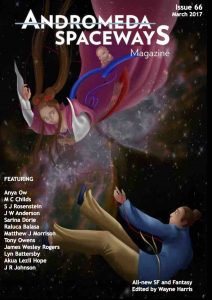 How’s everyone been? It’s been months since my last post. Life has settled down. I just finished Horizon: Zero Dawn on the PS4, an incredible effort by Guerilla Games, easily one of my favourite games for that console. It’s essentially a female empowerment story, set in a postapocalyptic future world populated by robot dinosaurs, with diverse characters, a matriarchal society, great writing, and no boob armour. I was so invested in Aloy’s story at the end. And it’s a gorgeous game to boot, I really recommend it.

Made some progress on my reading list. Some recent highlights: