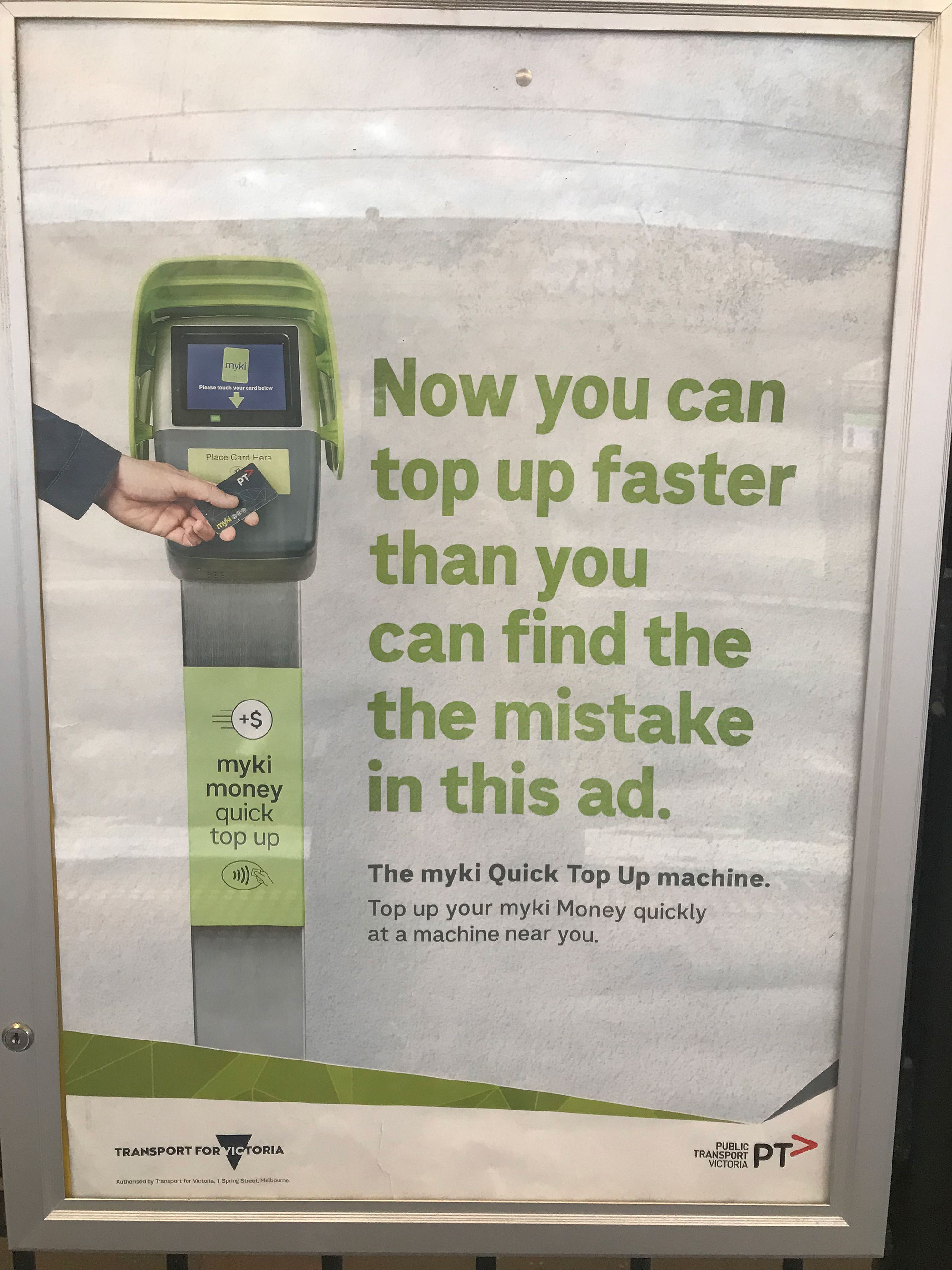 Don't you just hate it when you see a good ad? The social media manager and I saw this at the train station in Burnley on the way home, and we stared at it until the train came. Hint: it's not a typographical error. I'll put a second hint at the end of this post if you still can't figure it out, but damn, it's a great ad. Even the art director in the agency didn't figure it out and needed a hint. Great ads don't have to be complicated or expensive to make. Though my favourite ad of all time definitely would've broken the bank for anyone but the client it was made for:

There are a few great recent ads I can think of – particularly Tourism Australia's excellent recent use of Almost Every Famous Australian Actor Ever (and one New Zealander) in their last Superbowl ad:

For the most part though, the business of advertising has for me been accurately and hilariously summarised by Jerry Seinfeld's CLIO acceptance speech:

Speaking of weird and hilarious ads, there were a few strange ones at the Melbourne International Film Festival (MIFF) this year – including a highly fashionable, very Persephone in Hell ad for Emporium Melbourne, of all things. Enough ad talk now. On to film talk.

Running through part of August, MIFF's offerings have only become more diverse and more interesting every year. It remains a struggle to catch every interesting film when you're working, though, and some films only come up on my radar after the festival is over. I only saw the write-up about AQUARELA on Vox after the festival, or I would have tried to catch it – a documentary about water, with no talking heads, scored by Finnish symphonic metal band Apocalyptica, sounds great.

This year I caught five films, which is about my usual for the festival. There was LOS REYES, a documentary film about two dogs living in a skate park, which was very much like watching an extra-long YouTube video about two dogs. There was AMAZING GRACE, the highly acclaimed music documentary about a 70s Aretha Franklin performance with a troubled production, released after her death with the permission of her family (Aretha sued to keep it from being shown for reasons unknown). There was THE DEAD DON'T DIE, an extremely meta film with Bill Murray and Adam Driver about a zombie infestation in a small town. And THE REST, the second Ai Weiwei film about the refugee crisis.

My favourite film this year was WATSON, by Leslie Chilcott, a producer of the INCONVENIENT TRUTH. It's a beautifully shot, powerful film about Captain Paul Watson, the co-founder of Greenpeace and the founder of Sea Shepherd. It's worth a watch if you can catch it somewhere, but for some reason marketing for this film has been spotty. It's September now and I still can't find the trailer anywhere to link it. Reviews are also sparse on the ground, probably because of the generic name of the film. Here's one by THR. The film aired at Tribeca, but I'm not sure if it'll get wider showing anywhere else, which will be a pity.

Scary as it is that Disney now owns Star Wars, the Simpsons, MCU, and Pixar, among other things, I guess I am still excited for Disney+ because of Pedro Pascal's The Mandalorian. I first encountered Mandalorian characters in the first KOTOR game, where Canderous was one of my favourite characters. I'm sure Pedro will be even better.

There have been a few great articles this month. I particularly enjoyed reading Laurie Penny's excellent We Can Be Heroes on Wired, a great read for anyone who's ever loved fanfiction. For books this month:

Is it just me, or were there a lot of writing deadlines this month? Including the one at Uncanny. Deadlines are good for me: legal practice wired me to respond to them, so I tend to write more when there's a deadline in mind. Especially a themed deadline. I didn't hit every deadline I wanted to this month, though: I've recently started playing Fire Emblem: Three Houses, a tactical RPG that's eaten most of my free time. It's a fun game on the Switch if you like tactical JRPGs. There's the usual character design issues with such games (boob armour, stomach windows, the works) but it's an entertaining, very replayable game.

Hoping to finish my sequel to THE FIREBIRD'S TALE before Nanowrimo this year, but we'll see. I don't know if any publishers would even be interested, given THE FIREBIRD'S TALE was already published before by the now-defunct Less Than Three Press, but I guess I'll like to finish the book for my own satisfaction, if nothing else.

Hint for the ad, if you still can't see the mistake: read the green copy out loud word-for-word, very carefully.

This year I took a case to trial that, in the interests of justice, should never have been brought against my client. I filed a motion to exclude the prosecutor & he wrote a scathing reply. Today I got one of the sentences he wrote tattooed on me as a badge of honor ✊🏻

Thanks to this I also just realized https://simpl.fyi/ existed. My Gmail is no longer an eyesore...

That was close. Even though I was suspicious, I still almost got fooled. 4

When I say it is illegal, I don’t mean “if I went to Hong Kong and delivered the speech there right now it would be illegal.”

I mean posting about it online right now is a crime because it applies to everyone in every territory.

Fun fact: this speech is now illegal in Hong Kong due to the national security law that just went into effect.