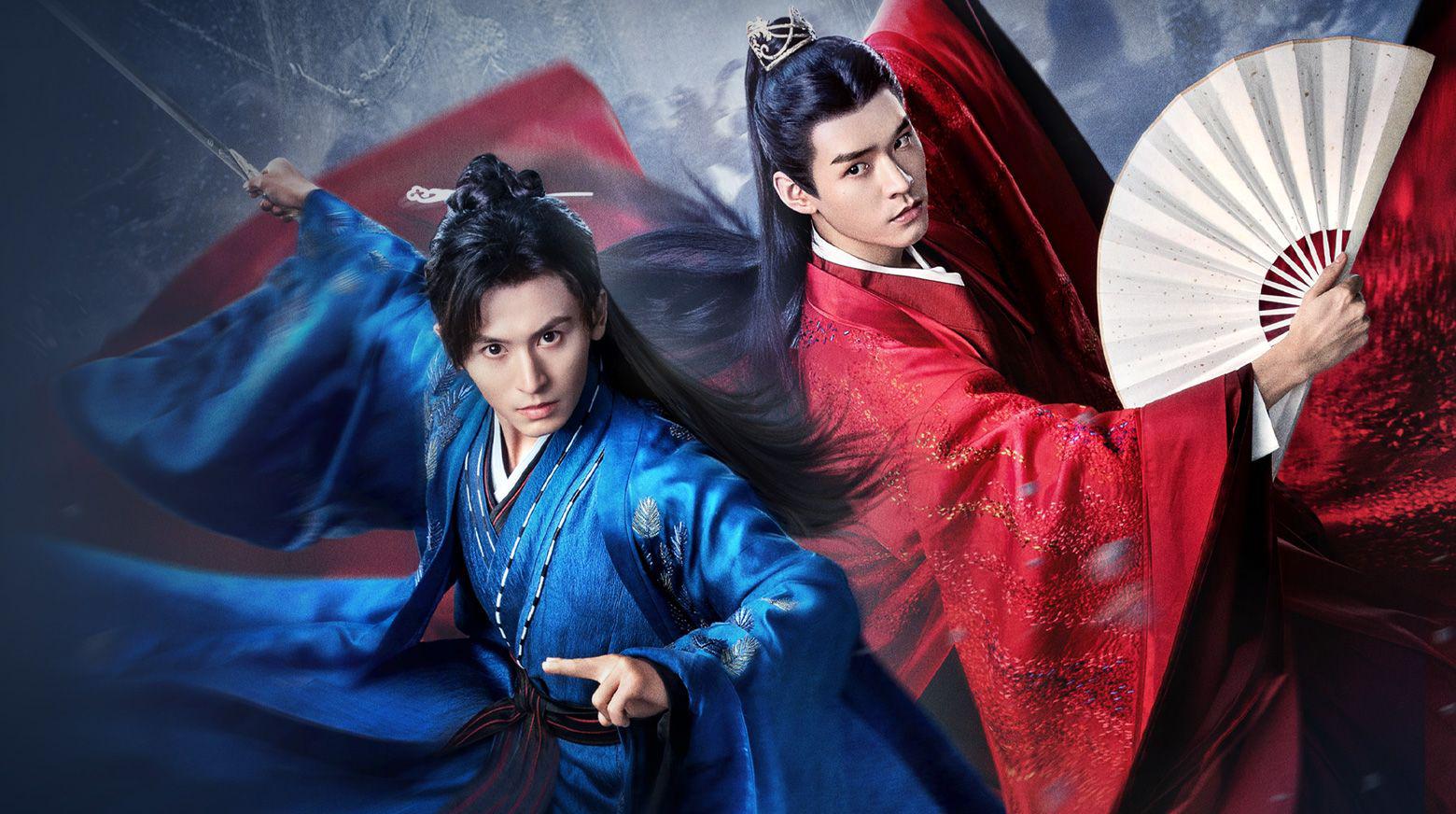 I am asking you to watch Word of Honor | 山河令 .

Even if (especially if!) you've never watched wuxia before. Even if you don't like the danmei (Chinese BL) genre. For all its troubled production, tiny budget, and occasional plot hole from adapting a book with characters so Unrepentantly Murder that they'd never pass censorship approval, the film is a visual, storytelling, action, and acting treat. It is, despite all odds, one of the most romantic tv shows I've ever watched. The fact that the romance in question is between two deeply flawed, still very murderous men close to their 30s instead of the usual wuxia tv show style of het youths/teens is amazing. The fact that it somehow passed censorship still amazes me. The tv show reminded me, to quote this great review, why I still love wuxia. As the scriptwriter for the show, Xiao Chu (a 32!! year old woman on her first scriptwriting project!) noted:

“Because of my experience studying and living overseas, I’m deeply aware that the roots of China’s classical culture and romance are in wuxia. Marvel, Shakespeare, those are all the Westerner’s romance. But our romance is Bi Xue Zhao Dan Qing. Chinese people really only experience the cultural pride that’s carved into our souls in wuxia. As it goes, ancient scholars with jianghu dreams, it’s composed of an extremely complicated cultural root system.”

Wuxia is indeed a very Chinese genre. I was lucky to be able to grow up with the genre in Singapore, reading Condor Heroes, watching Hero with my friends in theatres. House of Flying Daggers, Wuxia, all the way to Shadow... I've enjoyed them all. But Word of Honor is what made me love the genre all over again.

Due to its tiny, extremely Wolong-nut-supplemented budget (the nut brand was the main sponsor, which is why there are some hilarious in-film ads), Word of Honor did make heavy use of CGI. As much as the sets do start quickly repeating themselves, the show and its surprising breadth of costumes remains a visual treat. As Zhang Zhehan (Zhou Zishu) mentioned in Ace Actress, one important thing you need to have in guzhuang (historical) drama is 美, or 'beauty', and despite its budget, Word of Honor manages that in spades. Loved in particular the Peach Blossom first fight between its protagonists. Zhou Zishu is still wearing a beggar's disguise at this point, and Wen Kexing is trying to test him.

I have a low attention span, particularly for TV. That's one reason why I love wuxia: its stylish, highly choreographed fight scenes. Again because of its low budget, many of the stunts were done by the actors themselves, which allowed the scenes to be shot to gorgeous effect. Word of Honor has a number of great set piece fight scenes peppered through the series, enough for any lover of wuxia in general to appreciate.

Despite being a BL "adaptation", Word of Honor's script was written by someone who was a big fan of the book (Tian Ya Ke by priest), and the actors and director were all familiar with the source material. As such, the show was filmed as a BL romance, lines and all, and was dubbed over to pass censorship. People who can lipread can still see the original lines, as the camera zooms in on the actors whenever they're speaking dubbed-over lines. Some of the real lines were even later revealed in "Behind the Scenes" and "Episode Specials" on YouTube by YouKu, I guess now that their show has gained so much popularity that they're starting to get drunk on power.

Either way, other than the great, very poetic script, the main actors also have great chemistry. In the Behind the Scenes eps, you can often see Zhang Zhehan directing Gong Jun on how to get more out of a scene, and he's clearly had a lot of input on his own character. Many of the great scenes in the show are ad-libbed. This collaborative creative experience has clearly led to Word of Honor being the experience that it is, and you can also see how much fun everyone had with their characters in the Behind the Scenes:

I don't think there's anything quite like Word of Honor on TV right now, whether in Asia or outside Asia. Not a 36-episode m/m romance (and m/f, and f/f: Liu Qianqiao's actress confirms in an interview that her character had something going on with Xi Sang Gui) with a great plot, a literary script, and well-defined characters of both genders, all of whom have agency in their own lives. I'm on my third rewatch of the show, and it still surprises me. If you haven't seen it yet, I hope you give it a chance. The episodes are free with multiple subs on YouKu's YouTube here. Happy watching! Hope it doesn't eat your life like it has mine.

My ghost short story, A Grievance of Ghosts, has come out in the latest Lamplight Magazine issue. You can buy it here. It's a story about ghosts and parks, the agony of being ignored, and transformation at your own choice and pace.

Further, I also have a climate fiction story, Redline, which is in Volume 3 of Everything Change, a free-to-read anthology. Shortlisted for the climate fiction prize, it's a story about Singapore underwater, a future vision plagued by rising temperatures, killer mosquitoes, and an unwillingness to let go of the past.

Other than Word of Honor, which ate my life for a whole month, I've also checked out DOTA: Dragon's Blood, which is surprisingly... not terrible? Especially after you get past the first episode.

A Writer's Odyssey is a strange fantasy film based on a short story. Entertaining watch, especially the ending, which shows why you need trained ghostwriters if you want a good story finished, haha.

The Yin Yang Master: Dream of Eternity (Qing Ya Ji) is on Netflix, along with, confusingly enough, another film also named Yin Yang Master. Both are based on the Japanese Onmyoji books. I preferred Dream of Eternity, which is a deeply silly, yet very entertaining story based more on the two main characters (Qing Ming and Bo Ya), vs Yin Yang Master, which introduced two het pairings that aren't in the books. Either way, both films are beautiful fantasy xianxia films, and if you're only going to check one out, I'd recommend Dream of Eternity. Please suspend disbelief, especially during the first part.

Thousand Autumns is available on YouTube for free with English subs, and is a 3D high budget xianxia BL adaptation of the book with the same name, following Shen Qiao, a disgraced leader of a Daoist righteous sect, and Yan Wushi, a powerful leader of a demonic sect with a secret flaw in his martial arts. While I find Yan Wushi often annoying at the best of times, I grew quickly invested in Shen Qiao's story. If it follows the book, it'd be very much about how far one person can go to hold on to his righteous principles despite all odds: and the courage he needs to be willing to change and adapt his worldview while still being true to himself. The show does a great job of animating the intricate fight scenes in the book.

Thanks to Word of Honor, I'm extremely behind on everything, so. Here are the books I managed to read in March-April:

Priest | 七爷 / Qi Ye | The prequel to 天涯客 (Faraway Wanderers), the book behind Word of Honor, Qi Ye is more of an Imperial Court drama focused on Jing Beiyuan. Seven times fated to fall in love with his soulmate, Helian Yi, the 'love' part becomes accidentally corrupted by a reaper, Baiwuchang, causing it to be 7 lifetimes of enmity instead. The reaper sacrifices his cultivation so that Beiyuan can have a full redo of his first life on his 7th lifetime. Traumatised by his previous lifetimes, Beiyuan resolves to spend his 7th lifetime staying away from Helian Yi and being a useless playboy, but it doesn't work out very well...

Priest | 杀破狼 / Sha Po Lang | Priest's popular silkpunk epic, full of airships, power armour battles, strategic skirmises, court drama and diplomatic drama. Intricate worldbuilding with interesting characters. Has since been adapted into a large-budget BL drama, Winner is King, but it failed censorship earlier this year and was knocked back for major changes. Hoping it'd still come out at some point: I enjoyed this book.

Meng Xi Shi | 千秋 / Thousand Autumns | The book behind the animation of the same name (above). While one of the MCs, Yan Wushi, really drives me up the wall, the book has great Daoist xianxia worldbuilding with a lot of fight scenes, a highly entertaining read. Even though I kept hoping that the other MC, Shen Qiao, might snap and murder everyone (he never does).

Lu Ye Qian He | 妻为上 / The Wife is First | This was a weirdly stress-free read for a BL court drama. The murderous, bad-tempered 3rd Prince realizes at the end of his life that the only person who ever loved him was his male consort, the only person who chose to go to prison with him at the end. Reincarnated into his 19 year old self after his death, he resolves to change the mistakes of his past life.

Susanna Clarke | Piranesi | Worldbuilding was interesting and compelling enough for me to read to the end, though at parts I did feel like I was reading some sort of D&D campaign manual rather than a book.

Dempow Torishima | Sisyphean | Extremely depressing, body horror dystopia. I think every chapter contained something that was so weirdly horrific that I wondered why I was still reading, which was why I was fascinated to the very end.

Courttia Newland | A River Called Time | Another dystopian read, spanning many years and several philosophical concepts, set in an alternate version of London where only the privileged can move on to live in the Ark.