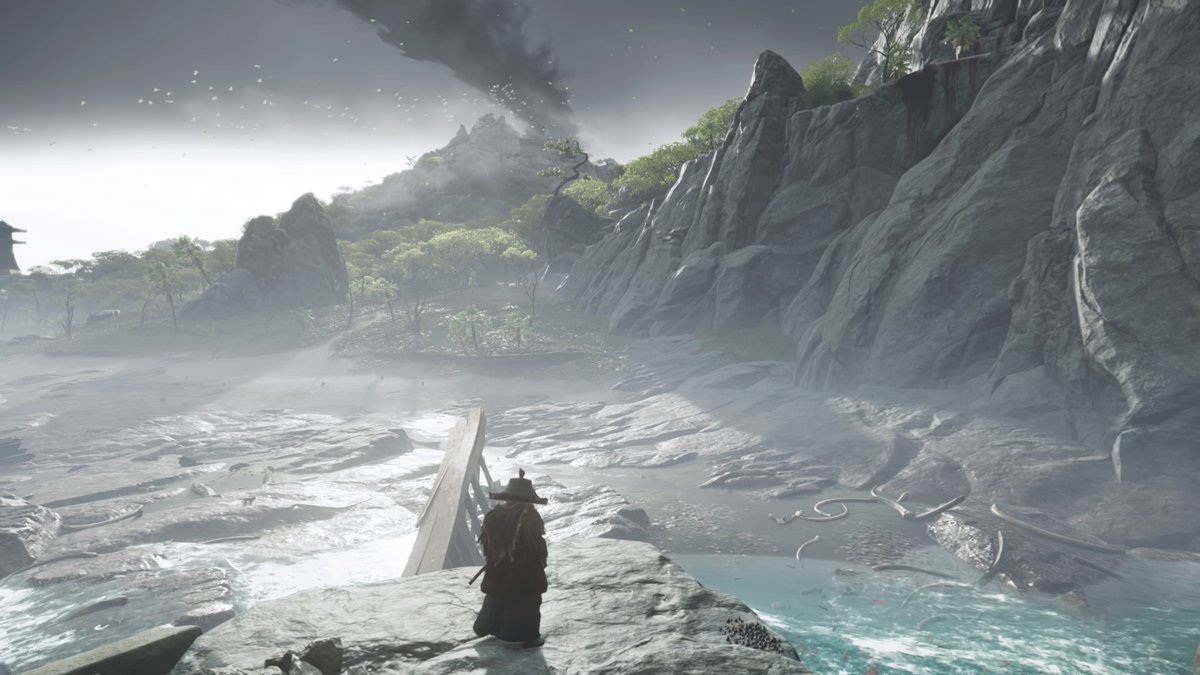 Damn, I've missed this game. Still one of the most cinematic, visually beautiful games I've ever played – Ghost of Tsushima's Iki Island expansion came out in August. Finished it over the weekend. It was, sadly (or not?) pretty much a five hour exploration of (even more) of Sakai Jin's deep-seated daddy issues. Dad Sakai has turned out to be an asshole, to no one's surprise. I've always found Jin's guilt at being unable to save his father from being chopped down by bandits/raiders vaguely weird, especially since everyone acts like it really is his fault. As such, being able to finally, after five hours [spoiler] have Jin realise and say out aloud that his father's death was not his fault [/spoiler] felt awesome. I love this game. It isn't perfect, but it's been one of the best Playstation experiences for me so far: both in the single player experience and on its Legends mode. Sadly, having spent most of the game throwing ghost weapons left and right, many of my screenshots look quite grim and don't do the game enough justice. 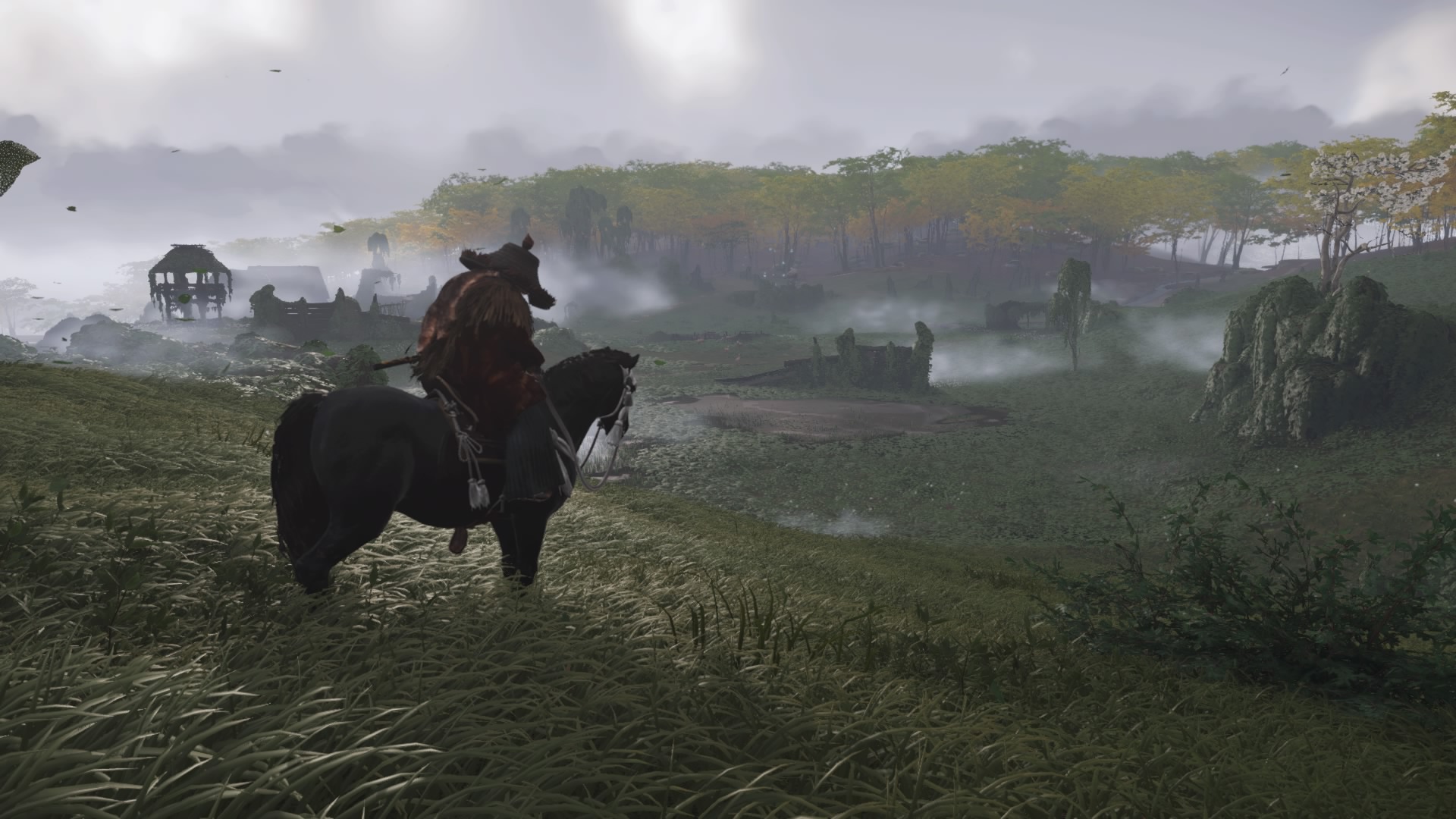 Genshin Impact's much-anticipated Inazuma patch is also out, with the Japanese-esque area available for players to explore. I am, I confess, very bored of this game, and could barely manage the effort to finish the main and character quests. Still, the sheer amount of free content available in this gacha game is great. And the Raiden Shogun's questline, main and not, was worth doing. This is the third contemplation that the game has offered as to what it means to be immortal – and the consequences of trying (or not) to govern when you are not entirely human. It's a surprisingly nuanced take for a game which is very much about getting people to spend money on pretty polygons, and I can only hope that the game will handle the next area, Sumeru, with as much respect, detail, and curiosity as it has its Japan-esque area.

Also, I finally got Genshin's lawyer character while rolling for the Raiden shogun, and her constellation does not disappoint. 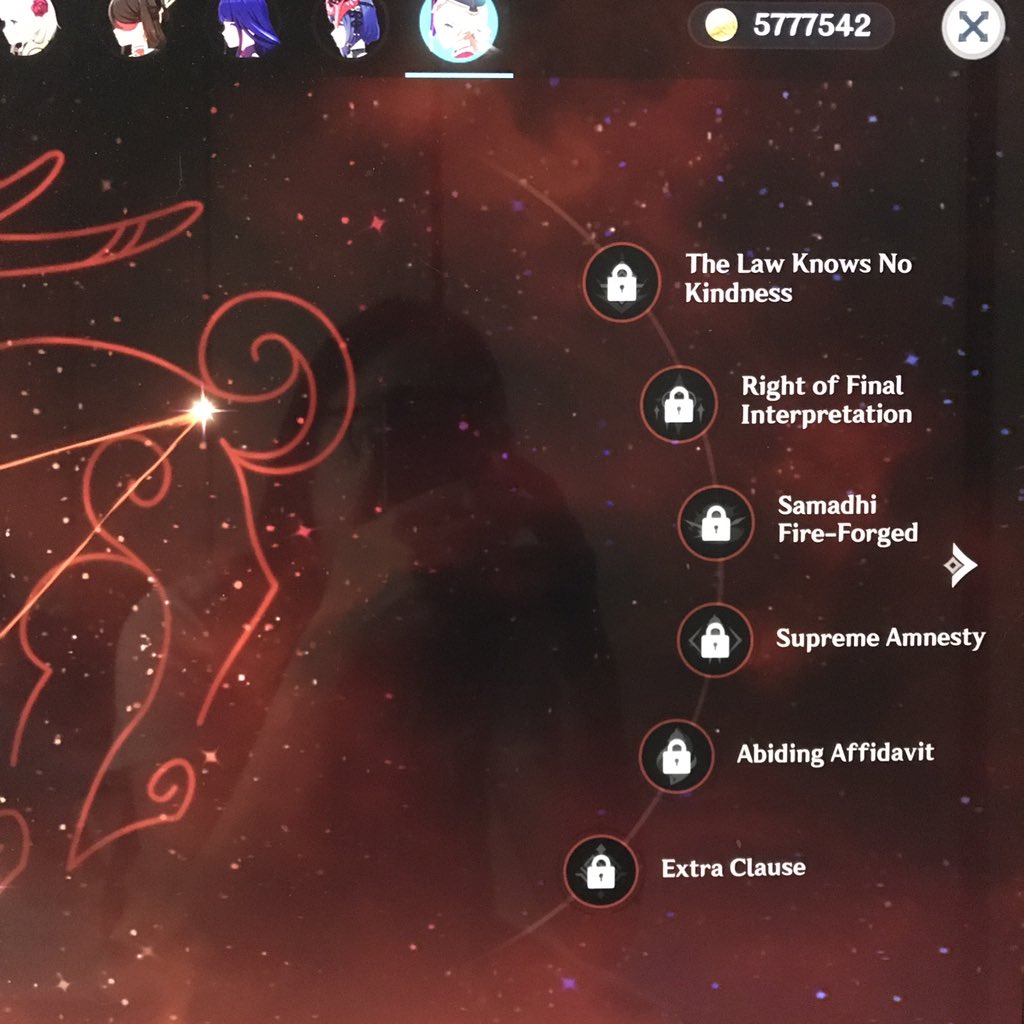 Marvel's What If's T'Challa episode was a joy to watch, a fun retake on the Guardians of the Galaxy plotline. Unsurprisingly, it was a lot less toxic. If only. Gorgeous final project by the late Chadwick Boseman.

Memories of the Sword is one of the most dogblood drama things I have ever watched. Very much about an auntie getting some serious revenge on her ex (a General, played by Lee Byung-Hun), in the OTT way that only a Korean drama can manage. Sword fighting scenes were fun, though the qinggong-ish work was kind of laughable. Pretty aesthetically pleasing intense revenge drama. I was very entertained.

Reign of Assassins is a John Woo wuxia starring Michelle Yeoh... which is probably all you need to know about it. Explosions, stunts, and plenty of action. I don't actually remember if I've watched it before -- the boat doctor who seems to double as an ER surgeon, cosmetic surgeon, and social calendar seems familiar. Great film, worth a watch, if only for Michelle Yeoh.

I have two short stories out this month! [ The Case of the Teapot of Enlightenment ] is a Peranakan wuxia murder mystery published by Translunar Traveller's Lounge, in which a Taoist priest and his silver fox, reluctant museum curator sidekick have to find a missing magical teapot. [ Fanspell: Flowers in Spring (RobYung, NSFW) ], published in Lightspeed (!!) is very much a story about fandom as it is about magic, and no, is not actually NSFW. I'm also in an Author's spotlight over at Lightspeed [ here ]. Check it out! 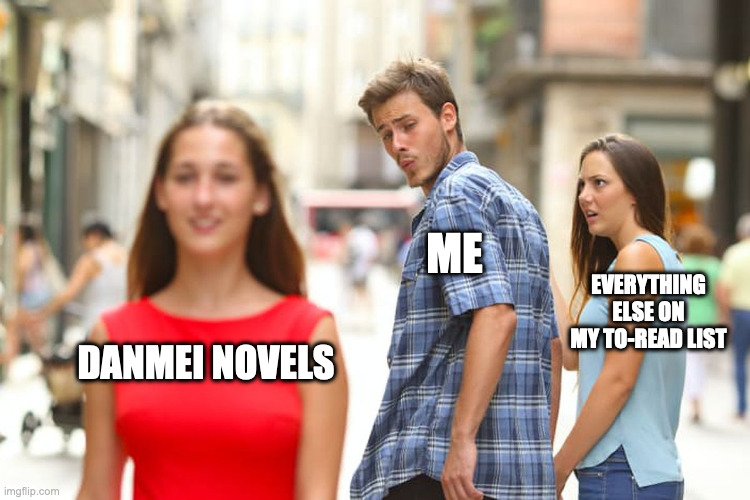 A friend on twitter reminded me of this very apt meme for the way my continued danmei obsession has ruined my usual reading habits. Notable reads in order of most favourite, read in August:

拉棉花糖的兔子 | 大宋小吏 / A Minor Official in the Song Dynasty | This hilarious book is about the MC transmigrating to the Song Dynasty (Renzong era), only to realise 30+ chapters in that it's actually a magical fictional Bao Gong AU of the Song Dynasty. MC sets off to reform Bao Gong's workplace, and a random prince falls in love with him. Worth a read in particular if you love the Bao Gong stories. Fun read. No translation.

杏仁布丁 | 海盗船医 / Pirate Ship Doctor | I've been reading a few medical transmigration books during August, and this book was weirdly hilarious. A modern-day Chinese surgeon randomly transmigrated into the body of an (English) ship doctor in the 17th Century, during the Golden Age of Piracy, and gets trapped aboard Bartholomew Roberts' crew. His medical system allows him to 'buy' all sorts of random things, all the way up to ultrasounds (to help a mermaid with a caesarean section of all things). CP is the MC x Roberts, ahaha, though it's largely one-sided pining on Roberts' part, of all people. Entertaining read, lots of ship battles. No translation.

黑蛋白 | 飞鸽交友须谨慎 / You've Got Mail: A Cautionary Tale | This book was. Hilarious. Basically grindr but ancient China, using carrier pigeon letters to match up men looking for men. The MC is a 40 year old virgin who's hoping to hook up before he dies, the ML is an annoying General looking for substitutes in place of his white moonlight – his childhood xiansheng/teacher. The MC's water-over-a-duck character carries this book to the very end, though midway through I was rooting for the MC to somehow find a way to unmatch with the ML. Even the Peng society (grindr) was trying to help them unmatch at one point. Dropped translation.

颜若优雅 | 权门毒后 / Rebirth of the Poison Empress | This author loves their OP transmigrated/reborn MCs, and this MC is no different. They have a great grasp of faceslapping, politics, and are great at writing both humour and drama, however. As entertaining a read as ever. MC starts off just trying to survive in his terrible home life / save his brother / take revenge on his previous life's ex (before the ex even does anything in the current life, which makes everyone rightfully puzzled), and ends up randomly married to a prince. Partly translated.

云过是非 | 丑娘娘 / The Ugly Empress | General MC transmigrates into the body of the Empress of the enemy Emperor ML, the man who killed him. Transmigrates again halfway, this time to a body of the man who killed him while he was Empress, which is when the m/m kicks in. Strangely enough, this is a highly entertaining read, and while it is m/m (all there is no NSFW+ stuff while the MC is still in the body of the Empress), I actually enjoyed the arc where the MC was the Empress the most. Entertaining read. Fully translated.

祝寧 | 入赘天师 / Enter the Celestial Master | MC is a Daoist priest who only wants to feed his new young apprentices, and as such decides to enter himself into the running to become the husband of a General ge'er. A lighthearted and funny read, in which the MC's ability to predict the future/people/fate isn't as destructive to the plot as I thought it might be. Not translated.

墨西柯 | 魔尊他念念不忘 / The Demon Venerable's Wistful Desire | MC transmigrates into a book where he is the only male member of an all-female dual-cultivation sect. Ages to 80 (it's xianxia) and as such, decides to die rather than do the plot development of torturing the villain until he turns evil. The villain ends up falling in love with him, then spends most of the book trying to figure out who he is (MC and ML were in the dark when they had to do the deed). Hilarious book. Bonus for an arc where MC and ML are in a forest which shows you your heart's desire as an illusion, and MC's is... to be able to hug a British Shorthair kitten. Partly translated.

南风歌 | 御赐良医 / The Honourable and Favoured Kindly Doctor | This medical transmigration book was so incredibly dogblood, it was amazing. MC is for very terrible reasons raised as a girl. The faceslapping is neverending to the bitter end, even when you're starting to wonder when some people really should give up and maybe move on with their lives. Too much detail about how to develop penicillin from melons, which is the kind of strange niche detail that I like in my medical isekai. No translation.

白日坐梦 | 穿到古代卖甜点 / Transmigrated to Ancient Times to Sell Desserts | MC, a famous dessert chef, transmigrates to ancient China just before he can win a prestigious pastry award. His transmigrated body belonged to a triad/gangster member, an identity that continues to give him serious issues through the whole book. The shou in this book is one of those spineless white moonlight characters, but thankfully grows somewhat of a spine closer to the end. Fun read for the desserts. Partly translated.

琪琪熊 | 穿回古代当美容师 / Transmigrating to Ancient Times to Be a Beautician | MC transmigrated to ancient China with a magic laptop with magic Photoshop. Not even kidding. This book was hilarious. Very much about skincare routines and wellness. Unfortunately, there is, unsurprisingly, an arc involving the sadly very Asian obsession with slimming down, but other than that it's an entertaining read. One of MC's first clients becomes so beautiful after the makeover routine that it ruins the ML's marriage. As such, the ML comes over to investigate the MC and just stays on, as one does. No translation.

香芋奶茶 | 男妻 / The Male Wife | This was a bit of a tough read at the start: the reborn MC is very disconnected with his life and kid, and is effectively in a cold war with the ML for something like 100 chapters. It's a strangely compelling read, and probably the first transmigration book I've read where a Daoist sect comes after the MC due to reborn souls being against the law of Heaven. Partly translated.

l镜中水月 | 医官御厨 / The Medical Officer's Kitchen | Entertaining transmigration read whether the transmigrated MC is both a skilled surgeon and a chef, and gets randomly involved with a Prince despite living in a remote village - aka all the things that I like. There is a large time skip where the MC and the ML are realistically apart, but it's a HE. No translation.

I really should stop discussing whether we're locked down or not in Australia... I seem to be jinxing the system whenever I mention on here that we're out of lockdown. Stay safe everyone, and get vaccinated if you can.

Happy #InternationalCatDay! In honor of our favorite four-legged companions, enjoy a selection of frisky feline photos and curiosity-inducing stories

Didn't realise The Admiral had a prequel film, Hansan, which is out now in theatres... for people who might be interested in Joseon-era naval tactics https://www.youtube.com/watch?v=OD1ocTY75ts

#SwordandFairyTogetherForever is so beautiful... filling up my storage with screenshots