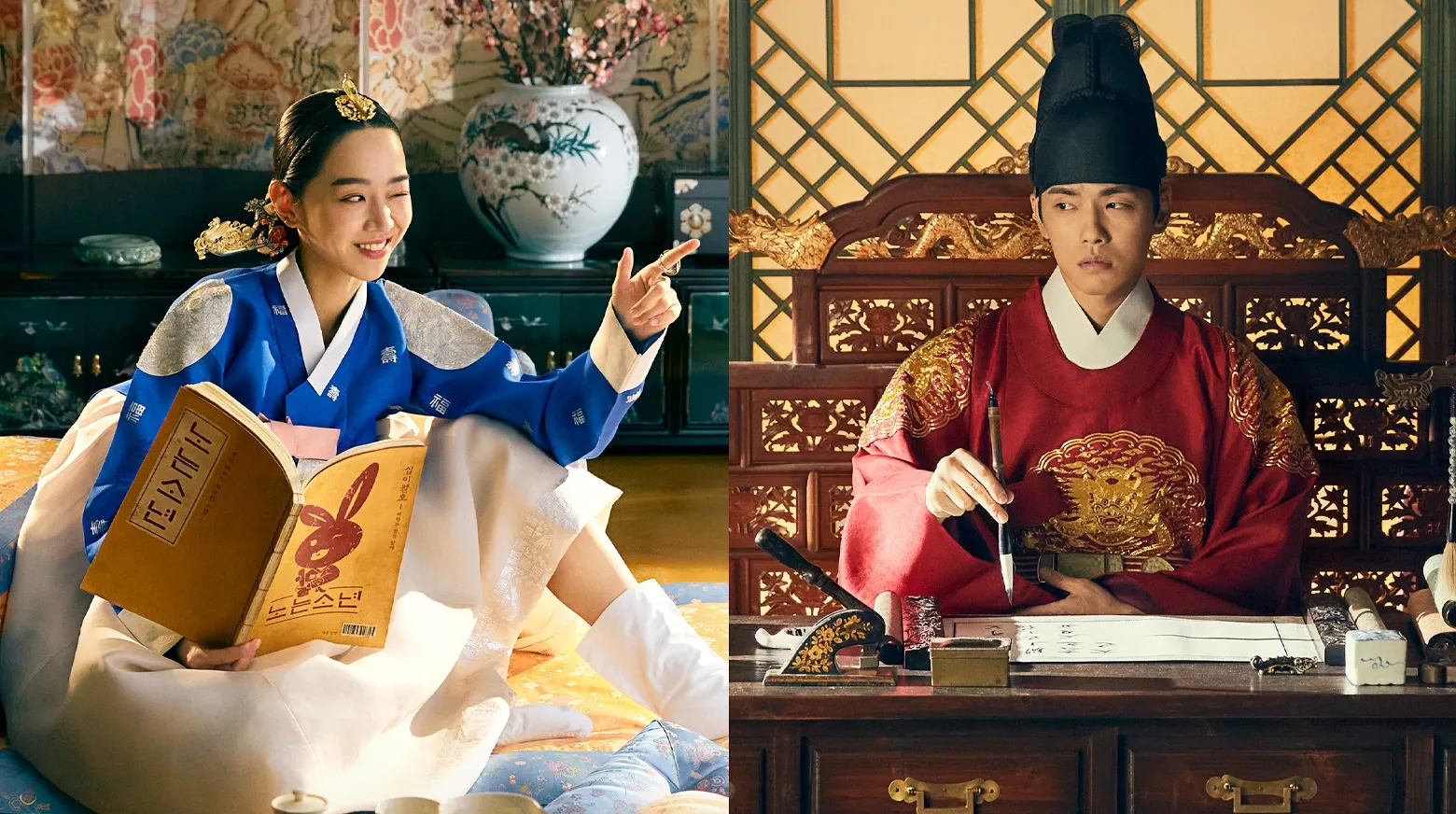 Lockdown has eased up in Melbourne, and I'm likely going to get vaccinated next week if all goes well. May everyone who's able to get vaccinated be able to get around to it soon, and as to everyone else, I hope things work out in your favour soon. In Australia, Pfizer is still only available to 40+, and the rest of us, including me, have to apply for AstraZeneca. Happy with any vaccine at this point, to be honest. The rollout down under has been shockingly bad for a developed country.

I've been watching Mr Queen, the Korean adaptation of Go Princess Go, which was based on the book 太子妃升职记. The Korean adaptation is a lot funnier than the book, and was the 7th highest rated drama in Korean television history. Basically, a modern day playboy celebrity chef suffered an accident (he fell off a balcony when a pigeon shit on him and hit his head in a swimming pool), and his consciousness reawakens in the body of Queen Cheorin in the Joseon Era. Naturally, he's not too happy about it, but does eventually try to adapt-ish, such as when he attempts to recreate Samyang Ramyeon:

The first ep is a bit over the top, but once the show settles in and gets into its comedic stride, it's great. I haven't laughed so much over a tv show in years. Highly recommended for your weekend decompression.

Trese is an entertaining horror/urban fantasy watch, currently available on Netflix. It's an adaptation of the Filipino komik series of the same name by Budjette Tan and Kajo Baldisimo, and follows the young practitioner Trese as she tries to maintain order between human and supernatural forces in Manila. Great dive into local mythology and legends.

Danmei books have continued to completely eat my to-read list in June, I give up. They're just so entertaining to read. Again some notable reads, by order of favourites:

唐酒卿 | 将进酒 / Qiang Jin Jiu | I thought Golden Stage would be my favourite book of this year, but Qiang Jin Jiu is definitely by far the best danmei book I've read so far, and also the best thing I've read this year. An imperial politics and military book with fantastic characters and a great plot that's such a page-turner that I think I slept at 2am every night until I finished reading. Frankly, I actually rooted for the antagonists for most of the book because of how well they were written, but I also spent 200+ chapters in a state of stress. This author is truly unafraid of burning everything down. The tv show is slated to come out next year, but weirdly only 24 eps long. Hopefully that's just book 1–this incredible book deserves a faithful adaptation. Highly recommended.

来自远方 | 清和 / Qinghe | Qinghe is one of my favourite transmigration-to-ancient China books, if only because it's a consistently hilarious read with a smart and funny MC who gets himself out of his own problems. He transmigrates into the body of a sickly scholar in the time of the Jianwen Emperor, and gets roped into the inevitable rebellion of the prince who would eventually become the Yongle Emperor. Great read if just for the detailed history, but again, also highly recommended for just how funny it is. Most of the first half of the book involves military strategy, most of the second half about governance.

木苏里 | 铜钱龛世 / Copper Coins | This great xuanhuan read is about a dragon's attempt to restore the power that was stolen from him by someone he can't quite remember, and the strange monk he meets along the way. Fantastic read with great characters and worldbuilding, fully (fan) translated. Recommended if you love xianxia/xuanhuan read with solid characters. Loved the dragon MC in particular, he's extremely petty and funny.

雪山肥狐 | 残疾暴君的掌心鱼宠 / The Disabled Tyrant's Pet Palm Fish | This transmigration-into-a-pet-fish book is strangely a highly compelling if cracky read. As per many 'system' transmigrations, the MC, who is now a fish, has to do missions in order to level up to turn into a human. However, his new 'owner' is a mute Prince with a reputation for fierceness. Most of the book handles the prince's disability fairly well, but certain parts (and esp the ending) I would have preferred to have been handled another way. Read for a deep dive into unscientific fish rearing techniques, hilarious system shenanigans, and a fun and smart MC.

五色龙章 | 穿到明朝考科举 / Transmigrated to the Ming Dynasty's Imperial Examinations | This transmigration book is a deep dive into what it takes to study for, sit for, and succeed in the Imperial Exams during the Ming Dynasty period, including looking into what makes a good essay, which books to study, and eventually, how to create half-decent poems. It also goes into massive detail about things like book printing. Not that much romance, though it's scholar x Jinyiwei, which I like. Entertaining read for people who love intense niche details.

绣生 | 暴君的宠后[重生] / Tyrant's Beloved Empress | Reset transmigration novel where the MC partner of the Northern Warlord prince has a groundhog day reset on his life experience. Sweet and interesting read, if typical of this kind of 'spoils the wife' sort of genre. The 'Tyrant' prince is actually more awkward and misunderstood, leading to a hilarious misunderstanding early on: the MC tells the prince that he'll stay with the prince if the prince doesn't hurt him, and the prince instantly thinks that means they should never have sex because sex might hurt... 🤣

梦溪石 | 天下 / All Under Heaven | Written by one of my favourite authors, who also wrote Chenghua/Sleuth of the Ming Dynasty, Peerless, and Thousand Autumns, this book is a great transmigration-to-Ming Dynasty (Jiajing Emperor) read, a story about the MC's attempted rise into becoming Prime Minister. As with many of their books, 天下 is very much about theories of good governance and balancing politics. Great read.

捂脸大笑 | 簪缨问鼎 / Royal Road / Courtly Aspirations | Entertaining transmigration-to-ancient China read, where a police captain transmigrates after sacrificing himself to save his colleagues into the body of a marquis. Follows his eventual rise toward Imperial power, using his training to gather loyal subordinates, control his estate, and raise an eventually too-loyal general.

七月侯 | 妃嫔媵嬙 / Fei Pin Ying Qiang | Realistic take on harem politics, including the effect of a male MC joining an all-female harem as part of his sister the new Wangfei's dowry. Veers into military affairs halfway through the book, but resettles back into harem politics after that. Miscarriages, child abuse, aphrodisiacs, the works. Smart MC makes it a worthwhile read.

一日知千 | 暴君宠婚日常 / Tyrant Pampering Wife Diary | Rebirth transmigration, 'spoiled wangfei' trope, where the MC attempts to correct all the misunderstandings from his previous life, including having a son again. Not a bad read, if nothing too outstanding.

五朵云 | 富贵长安 / The Rich and Honourable ChangAn | Another amusing take on the 'spoiled wangfei' trope, with a lot of focus on how the MC goes into business to strike it (very) rich.

毛鸟 | 炮灰逆袭之路 / The Path of the Cannon Fodder's Counterattack | Rebirth/Transmigration novel into a fake eunuch in an Imperial palace, who realises that the woman he loved would eventually murder him, so he decides to sabotage her chances of becoming Empress. Strangely enough, his attempts make the Emperor fall in love with him instead. The MC makes a lot of annoying forced errors in the book, so while it's an entertaining read, it might not be for everyone.

尹琊 | 傳說之主的夫人 / The Legendary Master's Wife | This extremely long cultivation book is entertaining if you read it with the mindset of the MC being a character in a game rather than anything else. That way, his constant drive to create better pills, level up, and get rich is more amusing than annoying. His hilarious way of naming his Pokemon-esque protective creatures is great: by deciding to create a ball (Qiu) team, and so naming each creature in strange ways. A sacred bird becomes LanQiu (Basketball) because his humanform is tall, a wolf becomes PiQiu (Rubber Ball) because his puppy form was fat and so on.

容恒 | 暴君 / The Cruel Tyrant | Harem transmigration novel with the occasional amusing parts, especially when the MC decides to dismiss the original form's ill-gotten (snatched) harem. His new harem deciding to indulge in the usual harem dogblood drama when MC is busy trying to hold the country together and actually govern was pretty amusing.

大风刮过 | 又一春 / Spring Once More | Funny transmigration harem read from the author of Peach Blossom Debt. Modern man transmigrates into the body of a prince who's legitimately confused as to why he has a male harem.

Read Qiang Jin Jiu. Do it. You can find the original on jjwxc, and the fan translation [ here ].