Procrastination is such a weird affliction for me. Sometimes, while trying to avoid The Thing which I set aside time to do, I end up doing a whole other Convoluted Thing, which turns out to be even more work than the Original Thing. tldr: I completely overhauled my website while procrastinating on writing a blog post. Posts shouldn’t even be hard, I told myself as I changed my theme and redid the home page from scratch. I write posts for my ad agency’s corporate blog every week, even. Though someday, upper management is probably going to regret the unchecked power they’re giving me over that blog in the name of SEO. Now I’m writing this post instead of writing the sequel to THE FIREBIRD’S TALE. Typical.

It’s been a good year.

The Aurealis Awards and a Stunned Deer Approach to Social Events

Sometime last year, I wrote Eight-step Kōan for the anthology Sword and Sonnet, a themed submission about battle poets. I didn’t really think the story would end up being selected – it was very much an analogy about the environment, in particular about man-made pollution and human nature. It was a nice surprise when it did get bought! I don’t often cry or laugh at my own stories, but I do at the end of this one. I got a copy of the anthology in the mail with its gorgeous cover and more or less forgot about it once Nanowrimo and the rest of the end of 2018 ran over me like a truck.

Fast forward to 2019. I get an email from one of the editors, Aidan Doyle, who tells me that FYI, not sure if I’ve heard, but the story has been shortlisted for an Aurealis Award for Best Young Adult Short Story, and would I be attending the award ceremony. My immediate reactions were:

Socially, I’m a bit of an awkward penguin. The more strangers there are in a room the more I want to hide in a corner and read my phone. It’s worse if the event / space is completely new. Even worse if there’s even a slight chance of having to do public speaking of any kind. I’d never been to any award ceremony before, let alone had stories nominated for anything, so as far as I was concerned the Aurealis Awards was a social anxiety trifecta. If I was going to attend, my main goals were going to be:

My friend Mars kindly agreed to accompany me as my +1 to the Awards so that I wouldn’t spend the entire evening doing a stunned deer impression. Naturally, not being much into networking herself, this pretty much meant we both did a stunned deer impression. While checking twitter and trying to figure out, with our mild face blindness, which person in the room matched Aidan’s twitter profile picture. Being Asian, we also naturally gravitated to the free food table, where we met Likhain, who’d also had the same idea. We did find Aidan. So far so good:

As the award ceremony got into swing, Mars and I realized that Shaun Tan was in the room.

If you don’t know who Shaun Tan is, I highly recommend following him on Instagram at the very least. Buy his books. They’re gorgeous. Complete works of art. The Rabbits is one of the most beautiful things I own. His other books are also incredible.

The riders #untoldtales @beinartgallery originally a sketch for bookweek; and a suggestion for public transport.

I didn’t win, but to be frank I was probably too excited to be disappointed. After the ceremony (during which for various reasons Shaun Tan collected a lot of awards, many of them on behalf of other people) we rushed over to Shaun Tan and failed not to be complete fangirls. I think he was a little taken aback, but he saw us later when we were preparing to head out and graciously offered to autograph something. We panicked. We’d arrived for the awards with nice ladies’ clutches and didn’t have notebooks. Luckily, for some reason Mars had cat post-it notes in her bag: 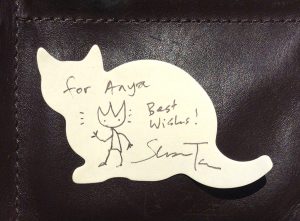 It was a good night.

Thanks again to Sword and Sonnet for buying the story and for forwarding it for award consideration. Also, I went home and read one of the other nominees: CATCHING TELLER CROW by Ambelin Kwaymullina and Ezekiel Kwaymullina. It’s a gorgeously written, heartbreakingly beautiful Australian YA urban fantasy. Check it out.

We passed it a couple days ago, but it has been 10 years since "On Fire", the strip I did that became the meme "this is fine". https://gunshowcomic.com/648