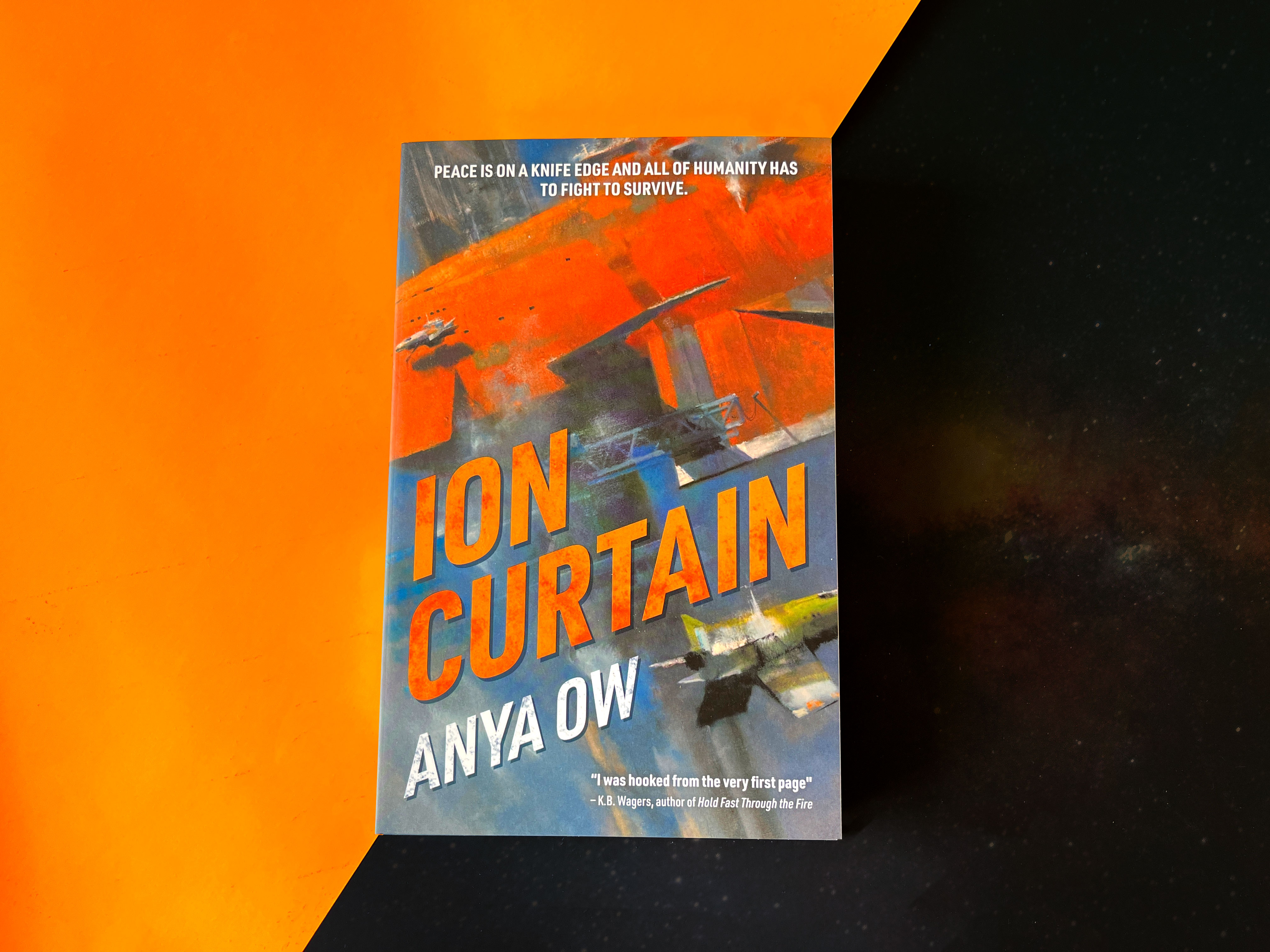 My space opera, ION CURTAIN, is nearly here! Out on 19th July 2022. Check it out if space operas, intergalactic espionage, and rogue AIs are your thing. The lead up to a book launch is always scary as hell to me, especially once promo starts rolling along and I start second-guessing everything I've ever done, but I hope people will love this book as much as I've loved writing it. A big thank you as well to my agent, Jennie Goloboy, for helping make this happen. I was so happy to be able to finally pick up an agent, but even then I thought it'd be years before I could get any book sold to a publisher – Jennie managed this sale within months. The main editor I worked with, Jim Killen, was super patient and extremely helpful: the book is much better with his help. And finally, the artist, John Harris – how beautiful is that cover? I also appreciate all the work that Rebellion Publishing's teams have put into polishing and promoting the book, my friends and family who've put up with my randomness all this years, and to my readers, new and old, whose support has been invaluable for years. Cheers.

What I've Been Playing 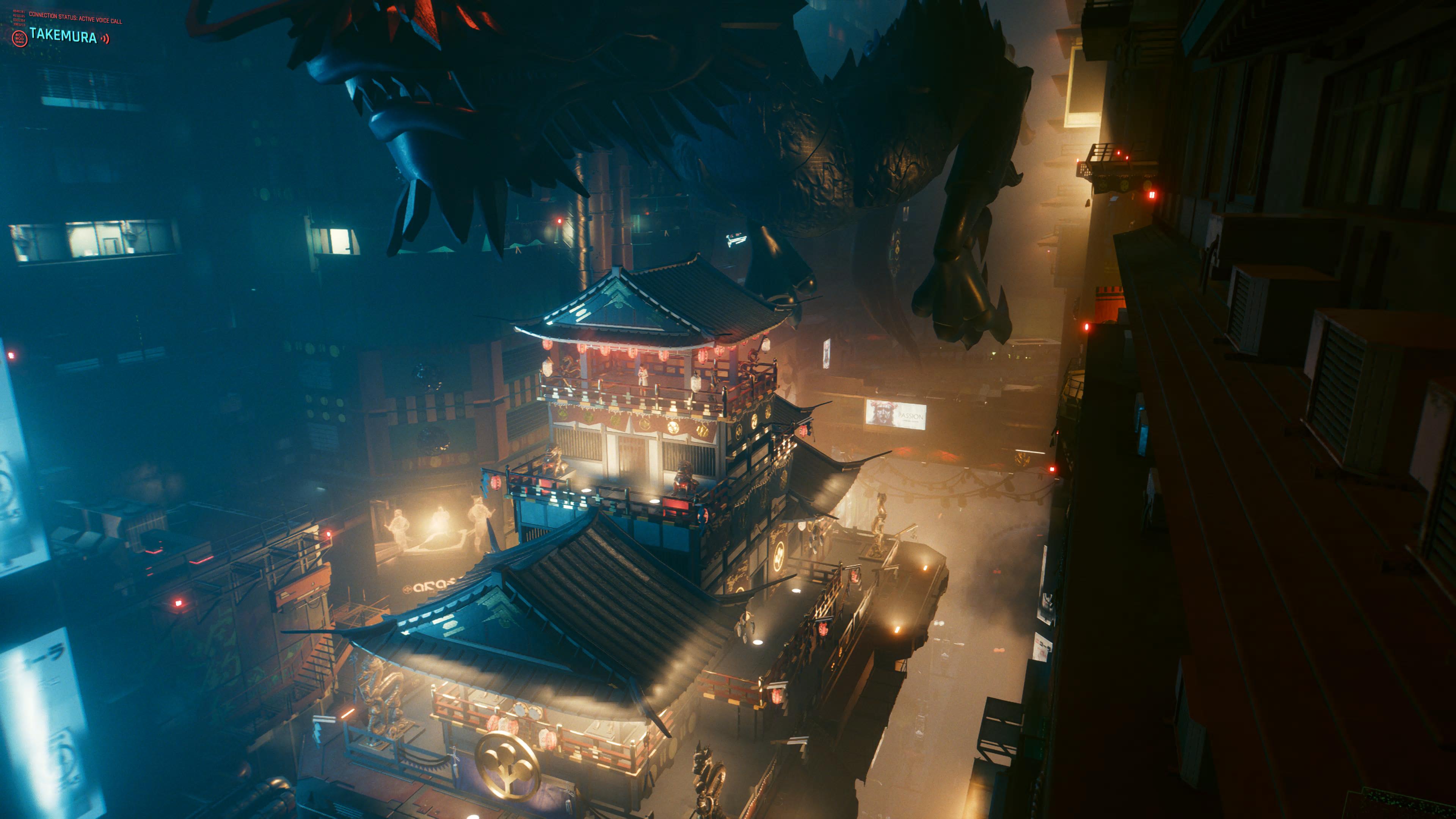 Cyberpunk 2077 | My first introduction to the cyberpunk genre was Mamoru Oshii's Ghost in the Shell film. It was also one of the first animes I'd ever watched. I was a teen, and I was mesmerised by a world where the mind could be disconnected from the self, where science was no longer capable of fully defining what it meant to be alive, where sentience could maybe be more valuable than form. I've enjoyed reading Neuromancer and Altered Carbon, watching Blade Runner (and reading Do Androids Dream of Electric Sheep), playing Shadowrun and more. I still love the genre, flaws and all. 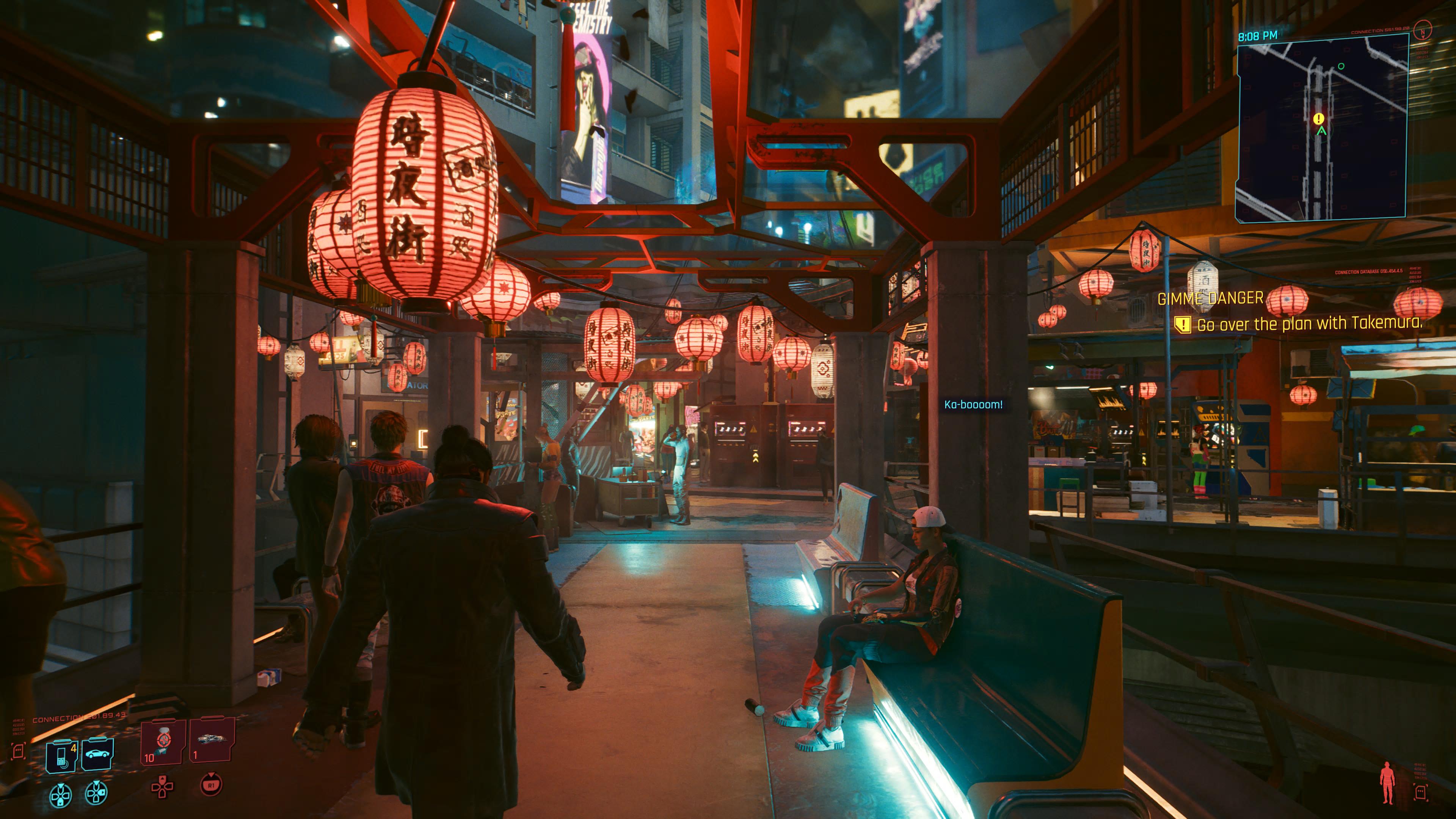 I'd planned to play Cyberpunk 2077 when it first came out because I'd enjoyed the developer CD Projekt RED's Witcher 2 and 3 games, despite how het they were (unskippable sex scenes, really?) and how depressing it sometimes was to play a game where all your choices tended to have bad consequences. At the time I only had an old PS4 and no gaming PC, though, so I didn't bother playing, especially since it was full of bugs to the point that one of my frustrated friends returned the game. Now that I have a PS5, I thought I'd try it. Cyberpunk 2077 is still buggy (I crashed so much), messy, has unskippable het sex scenes that are really weird in first person, and full of depressing choices with depressing consequences. But like the Witcher games, it's fun. And its world, despite being pretty much "Tokyo but very dirty", is gorgeous. 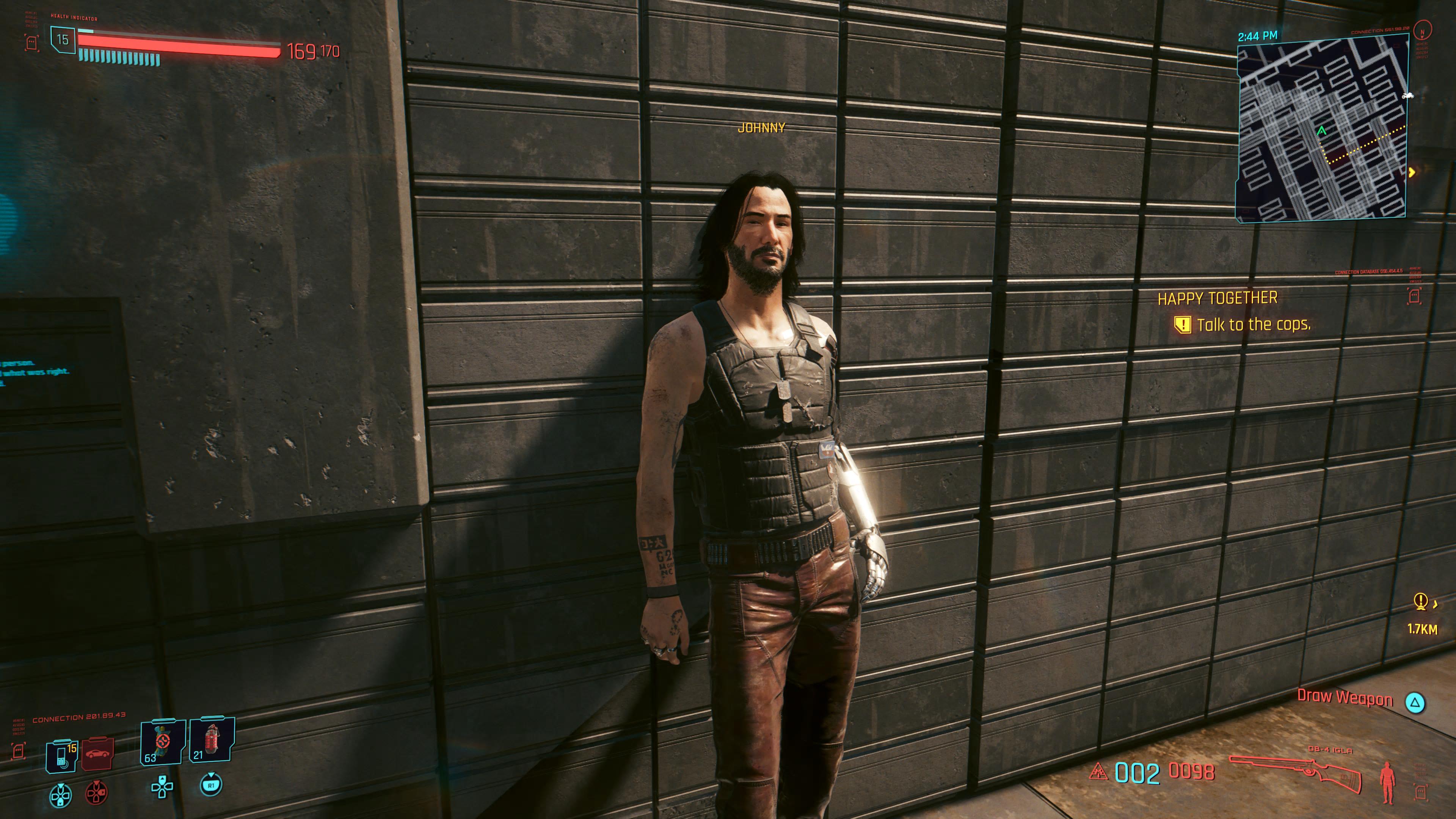 You're also haunted by the ghost of Keanu Reeves, whose character, Johnny Silverhand, had a much larger role in the game than I expected. He's pretty much the annoying trash fire backseat driver in your mind. It was irritating at first, particularly since I didn't like the Silverhand character, but you do need to befriend him if you want the secret ending where none of your friends die. 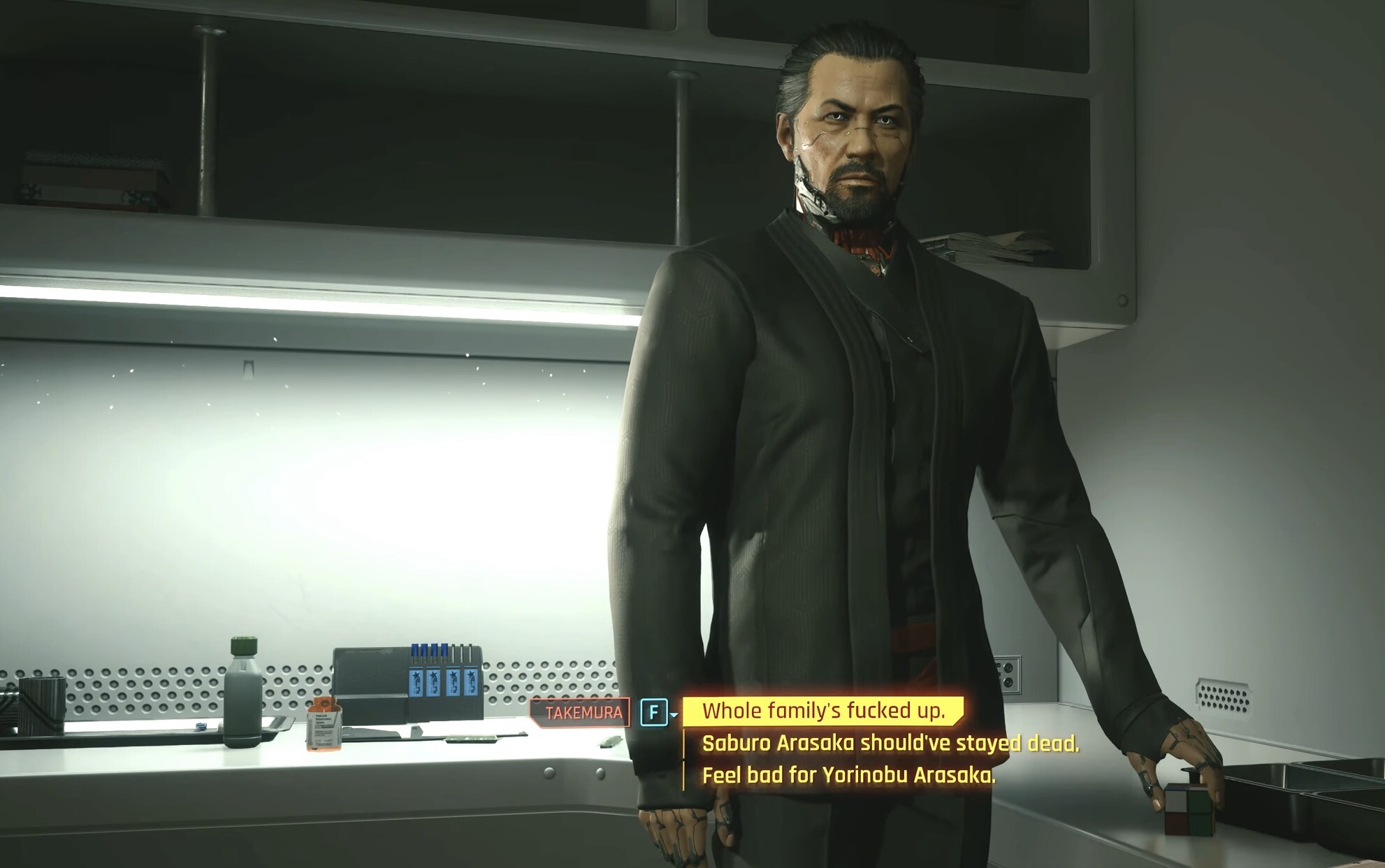 I was expecting the worst, but the Asian characters in the game aren't that bad. I loved Takemura Goro, who you meet early on, for perhaps obvious reasons. While there aren't any key non-Japanese Asian characters, the Japanese characters do drive the main plot. I feel they could be written better: Takemura, despite being a high-powered bodyguard, has a weird tendency to talk in a Mr Miyagi-ish way, something that the MC will make fun of him for. Yorinobu, who belongs to a very privileged family where almost every other relative is bilingual, who heads a large faction in his family's company where the entire board speaks English, is the only Japanese character who speaks in broken English. While I don't expect people to bother to learn languages they don't want to, he could just speak in Japanese, like Saburo, since translator implants auto-translate language. Instead, it just felt like a lazy way to other his character. Every Asian character is a stereotype in some way except maybe Wakako the fixer, one of my fave characters in the game. The game is based on a board game created in the 80s and sometimes it shows, but I was hoping it'd be a little more updated. Still a fun neon world to explore, if that's your thing, and the anime will be out later this year I think. Finally, there was also a quest which expressed a sentiment that, ex-lawyer that I was, I often think of when playing some of the quests. 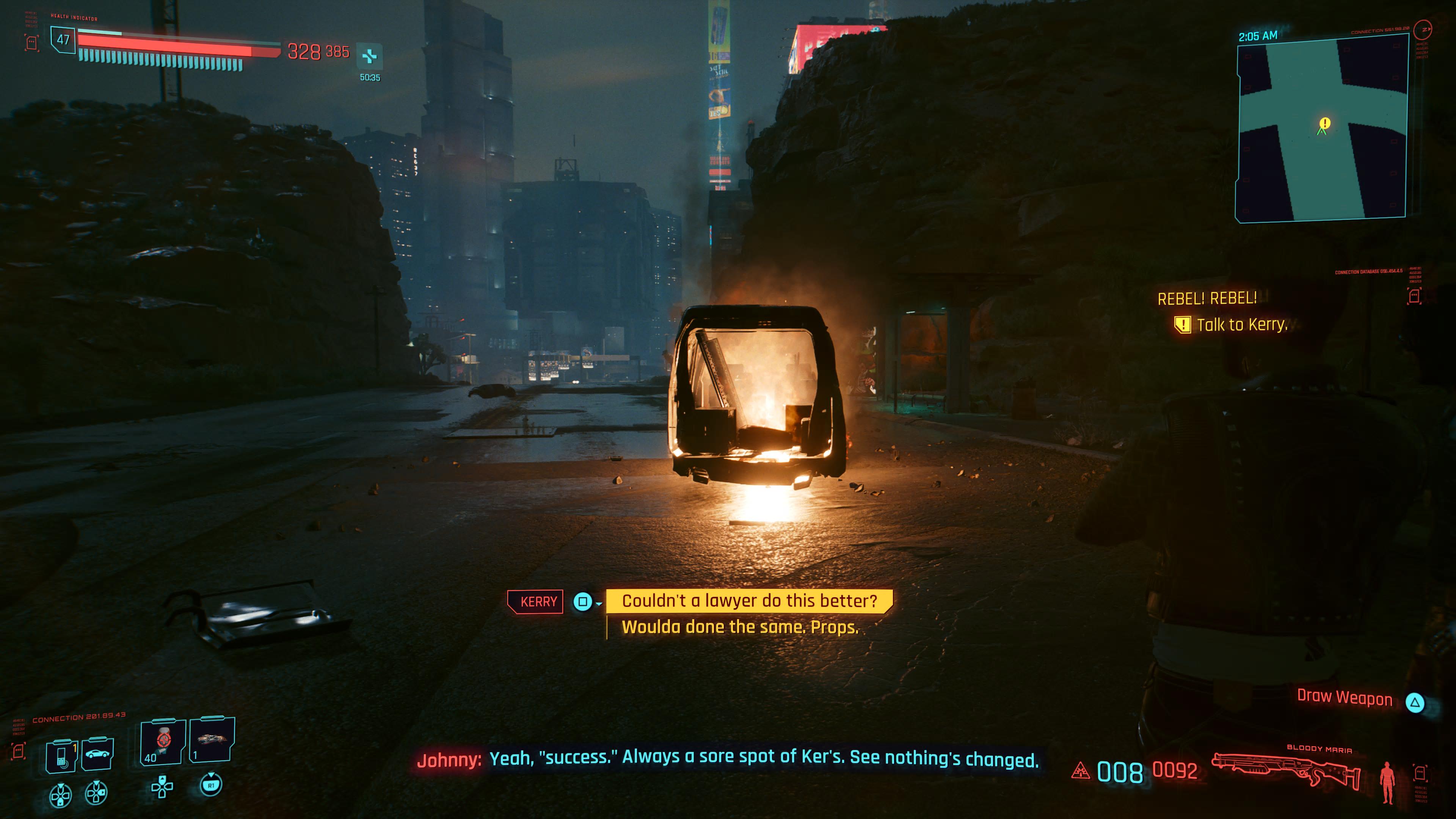 Everything Everywhere All at Once | I didn't watch this in theatre because I was afraid of the infection rate at the time, but have finally caught this gorgeous, incredible, mind-bending film. I think I cried so hard near the end that I was emotionally exhausted. It's beautiful, Michelle Yeoh, Stephanie Hsu and the rest of the cast were amazing, and I loved the script and its philosophy, and its integration of Daoist yin/yang concepts in such a fun away. Watched it a second time and cried again. Favourite film of the year.

RRR | This high-octane film is so wild. A friend fictional anti-colonialist tale of two revolutionaries who most likely never met in real life, it's an adrenaline rush of a 3 hour film where motorcycles get thrown at people and there are very OTT ways of saving kids from burning rivers and physics doesn't matter. It's the most expensive Indian film ever made, and a smash hit on Netflix for a reason. Buckle in.

Thor: Love and Thunder | At the start of the film I wasn't sure if I was in the right theatre, then something out of left field and quirky involving a pile of fruits happens, and yes. I knew I was definitely watching a Taika film. A two hour goat scream of a film, it is indeed, as Taika said in an interview, a film that seems to be as though they gathered a bunch of 6 year olds, asked what they wanted in a film, and said "yes" to everything. It's a highly entertaining and funny watch, very Taika, very queer.

It's still a struggle for me to concentrate on reading recently. I don't know why. I don't think it's just COVID (I caught and recovered from a mild case of it earlier this year). I think it's just how the pandemic and everything else just feels so full on. Anyway, I've managed to finally stop reading just popcorn novels. Here are some of the books I've read this year:

Zen Cho | Black Water Sister | My favourite book of the year so far, a love-letter to Penang, to urban legends, to angry Gods, to delicious food. A fast-paced, fantastic read set so much in local dialect, I could hear it in my head in all its familiar cadences as I read. The FMC is an unwilling medium to her grandmother's ghost, who turns out to be as much of a backseat driver as I thought. It's hilarious for someone who grew up in the region. I'm sure people who didn't will find it just as great.

P. Djèlí Clark | A Master of Djinn | I loved one of the earlier novellas set in this 'verse, and A Master of Djinn is a great addition. Action-packed, richly detailed, a gorgeous read set in an alternative steampunk version of Cairo where people coexist with Djinn.

Saad Hossain | Kundo Wakes Up | Hossain's The Gurkha and the Lord of Tuesday was one of my favourite reads in the year it came out, so I gave this book a shot. It's much darker, in a city that the climate AI Karma has either abandoned or is malfunctioning in, where inequity is rife and the poor are suffocating. It's also a romp about trying to find a missing person via a futuristic version of Final Fantasy 14 x RDR, which was funny to read as a gamer. Loved the ending.

Mykaela Saunders (ed.) | This All Come Back Now: An anthology of First Nations speculative fiction | Gorgeous collection of short stories, a must-read for lovers of SF&F.

Nick Bostrom | Superintelligence: Paths, Dangers, Strategies | Read for obvious reasons, this is was a concise look at the future of AI.

Elie Mystal | Allow Me to Retort: A Black Guy's Guide to the Constitution | After law school, I thought I'd never read a constitutional law book again. It was my worst subject, and I slept through class. I certainly didn't think I'd try a book about another country's constitution, but Allow Me to Retort is incredible. It's a funny, depressing, concise, super readable (didn't think I'd ever say that about a law book) look into the flawed document that is the American Constitution. If you live in America, read it. If you don't, read it anyway.

Shimada Sōji | The Tokyo Zodiac Murders | This was a bit of a weird read, but I'd loved Shimada's earlier books. A Sherlock Holmes-esque character tries to solve a very cold case and does, with its murderer someone very unexpected. Shimada's books are great if, like me, you love Holmes-style mysteries.

Nnedi Okorafor | Akata Woman | Being a huge fan of the other books in this series, I devoured this one. As before, a magical read, this time about a cycle of revenge, about returning what was lost, about self-discovery. It's gorgeous.

Happy #InternationalCatDay! In honor of our favorite four-legged companions, enjoy a selection of frisky feline photos and curiosity-inducing stories

Didn't realise The Admiral had a prequel film, Hansan, which is out now in theatres... for people who might be interested in Joseon-era naval tactics https://www.youtube.com/watch?v=OD1ocTY75ts

#SwordandFairyTogetherForever is so beautiful... filling up my storage with screenshots