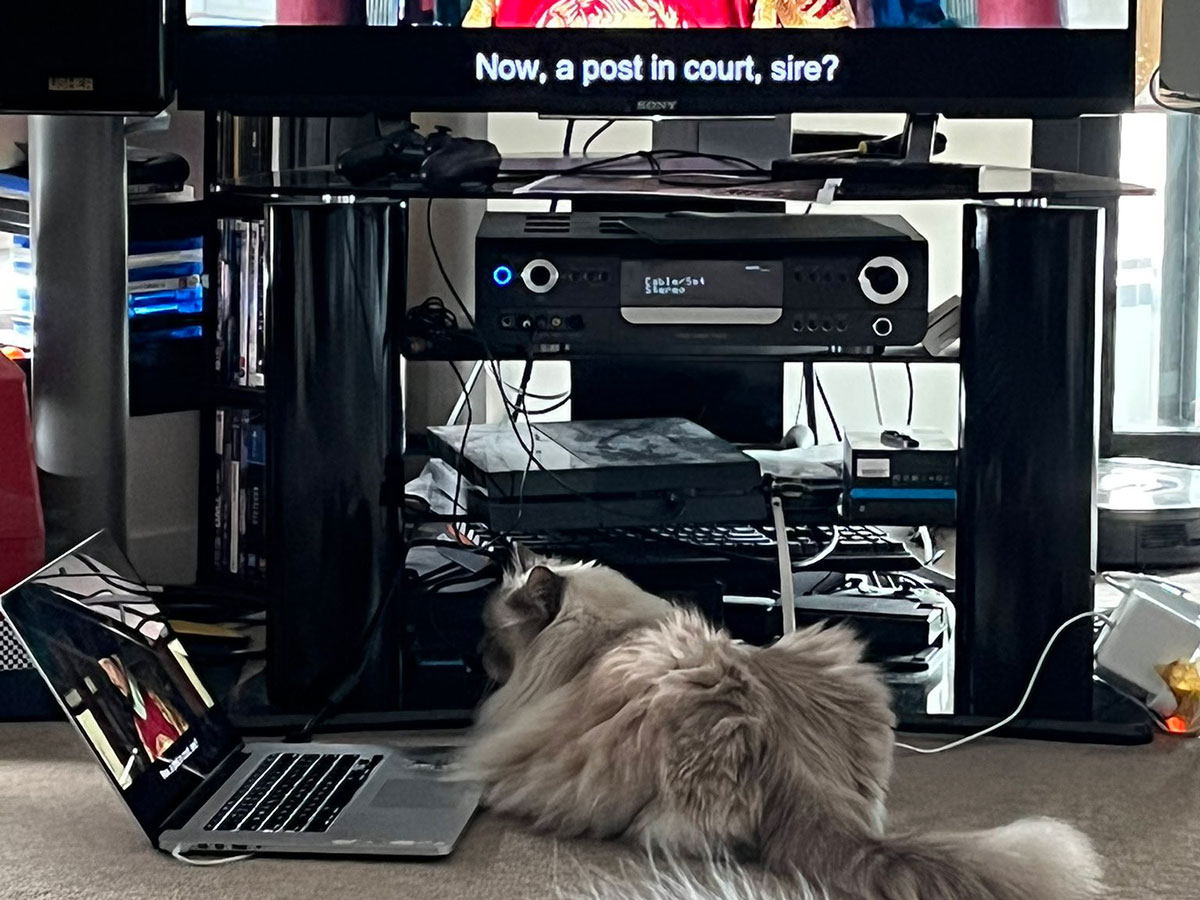 My 13+ year old cat Russ is a fan of films. He hardly ever will watch an entire movie through – notable exceptions are the Cats film and Hamilton – and I can't always tell what he likes. He seems to enjoy films with a certain colour grading, like the soft grey and sand of Dune, and he does enjoy films where there's more action and less people yelling at each other. That being said, I'm not entirely sure why he liked watching The Forbidden Dream above, given the film is a very soft (b)romance film between King Sejong (probably best known for inventing Hangul) and the great Joseon scientist Jang Yeong-sil.

Great watch if you're looking for something based on a true story, though their friendship does have a historically sad ending. Big name cast as well.

October has been a month of largely sageuk (Korean period drama) films for me, very much because of the costumes and plotlines. Of particular note are:

Kundo is an entertaining martial arts film that draws very heavily from the Western film aesthetic, down to the character introductions, dark humour, and the soundtrack. It's beautiful as well, with its highly choreographed action sequences. Great watch, especially if you're a fan of Westerns.

I'm not usually a fan of romcoms, but The Princess and the Matchmaker is a fun watch – though you'd have to suspend disbelief at some points. A sheltered Princess has to marry in the hopes that the happy event will bring an end to a drought, and she decides to personally investigate each candidate incognito. This film is the 2nd out of a series of 3 about Korean fengshui practices, including The Face Reader and Feng Shui. The other films are not rom coms – Face Reader, for example, is very much more of an arthouse film and tragedy.

A Donnie Yen action film where Donnie plays one of the Jinyiwei, 14 Blades is a typical Donnie film: beautiful action choreography, plotline somewhat at a secondary seat. The romance plot was completely unnecessary, and the film seemed to feel that way as well, since it effectively petered out to nothing. Since it's Donnie, it's still an entertaining watch with lots of gadgets, set during the Ming Dynasty.

Dune is the only English film I watched this month. I read the first book a long time ago, which I enjoyed, and barely remember a lot of it. The film felt slow paced, but it's gorgeously filmed and suitably atmospheric. I did like Oscar Isaac as Duke Leto and Jason Momoa as Duncan Idaho. Spent some of the slower scenes going through the book's wiki since I never read past the first book (spoiler: a friend told me that a certain character ends up turning into a half worm, and after that I lost interest). If you're a fan of the book, you've probably already tried watching the film. If you're not, I don't know whether the film will be able to draw you in. It is very much a film of a book written in the 60s.

Some of the danmei books read in October, from the most interesting onwards. Most of the below are not translated.

雁过寒潭 | 我在诏狱看大门 / I Had to Guard the Prison Door | Hilarious read where the transmigrated chef ML ended up in ancient times as the fictional little brother of one of the most notorious Ming Dynasty historical characters: Wan Guifei, the concubine whom the Chenghua Emperor was deeply in love with. ML gets shoved into a role in the Jinyiwei, and goes from solving fun little cases to actually working as a true Jinyiwei. History buff author appears to have been a big fan of Wan Guifei.

故筝 | 大明武侯 / Wuhou of the Ming Dynasty | Was expecting more strategy given the only historical figure I know with the 'Wuhou' title is Zhuge Liang, but this was very much more of a feng shui mystery read, with one murder feng shui mystery after another. Great worldbuilding, unusual read due to the amount of detail that went into each chase. MC is a transmigrated feng shui master from modern times, and the ML is, of all people, Zhu Di (The Yongle Emperor).

招展 | 我在大明做县令 / I was a County Magistrate in the Ming Dynasty | Notable transmigration read, if only because of the MC's very specific college degree (poverty mitigation). Hilarious because of the 'corrupt official system' in the book, which can only advance points if the MC embezzles things: going from one cabbage to a hundred catties of tea onwards. The kindhearted MC trying to get system benefits while not truly being a corrupt official was a fun read. ML is a fictional prince.

风吹翦羽 | 太子妃[重生] / Crown Princess | A Crown Prince from a slightly later dynasty transmigrates into the body of a Crown Princess from just before the end of the previous dynasty, making for a really interesting take on the transmigration trope. A veteran of court battles, the irony of the MC now having to fight harem battles doesn't escape him, given in his previous life he was the one with a backyard full of women trying to please him. Fun political read. Bonus for MC feeling repeatedly tangled as to whether he should murder his effective ancestor, the man who would eventually usurp the throne.

匪君 | 长媳男当 / How I Survived in Transmigration with My Ghost Hubby | Strangely fun read where the ML General is actually dead, and has to haunt various items belonging to his yin marriage MC partner. Bonus for the MC occasionally having to save the ML from Daoist exorcisms.

且拂 | 我在皇宫养胖帝兽 / I Raised a Fat Emperor Beast in the Palace | Funny read where, for some reason, the MC didn't seem to realise the 'neglected strange creature' absorbing energy by the moon in the Cold Palace was a miniature dragon (the Emperor's animal form), and kept trying to force-feed it meat pies / save it from the 'sea of suffering'. Cute text, especially after there are baby dragons.

桑奈 | 暴戾世子的代嫁男妃 / The Violent Heir's Replacement Male Wife | The ML cultivated a bad and fake reputation for being in love with a top courtesan in a brothel, and was made through imperial decree to marry a woman from a small border clan in order to balance his prince father's power. Black-bellied schemer of an MC takes the place of his cousin because he needs to enter the capital to repay a life-saving debt to the third prince. Highly entertaining because of how intelligent the MC is, though it does go through the usual danmei tropes for books where one character is pretending to be a woman. Surprisingly, the female cousin ends up being very supportive (instead of being a 2D shrew like how these books often go), and is very much part of the MC's schemes. Came for the trope, stayed to watch MC run rings around everyone, including the Emperor.

凔溟 | 贤妻难当 / A Good Wife is Hard to Be | While I enjoy modern doctor transmigration stories, this particular doctor MC is a director of surgery who used to do epidemic work in third world countries, which makes him a particularly OP transmigrator for this kind of genre. Bonus for MC finding a fellow transmigrant who, while not possessing of any OP previous life skills, turns out to be a great businessman. Entertaining political and military read.

北风吹 | 穿越之夫郎威武 / Transmigration of the Powerful Husband | Very overpowered MC came from an alternative apocalyptic fantasy universe with both druid-like plant powers and martial arts, became a ge'er (fictional danmei trope gender of a man who can give birth) in an unknown ancient dynasty. Amusing read if only because the MC remains stronger than the General ML for much of the book, especially when he learns how to use internal energy. Bonus for MC carrying the "drunk" ML away during the wedding feast in a princess carry, in front of all the other Generals.

后来者 | 糙汉娶夫记 / Story of the Rough Man Marrying a Husband | A more typical transmigration ge'er story (farming text, married a hunter), the most entertaining part of this story is how the MC tries to find a way to help the ML's sister get married. Difficult in their small village, since the ML's sister is not conventionally pretty, and is also a burly powerful character. In danmei these kinds of sisters often end up married to soldiers. This is one of the more uncommon books where the sister runs the gamut of originally just wanting to attract people to her due to her dowry (recruiting a husband) to deciding those people aren't worth her time, and the family being very supportive vs treating her like a leftover woman.

海中月 | 圣上有喜 / The Emperor is Pregnant | A rebirth revenge story where the Emperor MC (who is a shuang'er -- same trope as ge'er) starts off the story being brutally murdered in a way that is gory even for danmei books. As with these sorts of rebirth stories, the entire book is about how the MC tries to get his back on the prince character who killed him in his previous life. The ML is the Emperor's husband (sort of like the Queen status, but there's only one), and for much of the book is, unusually for danmei, pretty much a service top. There is a love rival character (the ML's shifu) who does go too far at one point though by way of dogblood attempts to steal the ML.

疯狂更新 | 我跟父妃住冷宫 / I Lived in the Cold Palace with My Father-Concubine | Unusual transmigration read, in that much of it is from the MC's child's perspective, and the MC's child also receives a system upgrade benefit (MC has magical space, MC's child has magical animals). Very much about the transmigrated MC trying to avoid the plot by self-maiming and getting himself thrown into the cold palace.

It's Nano month! Best of luck.