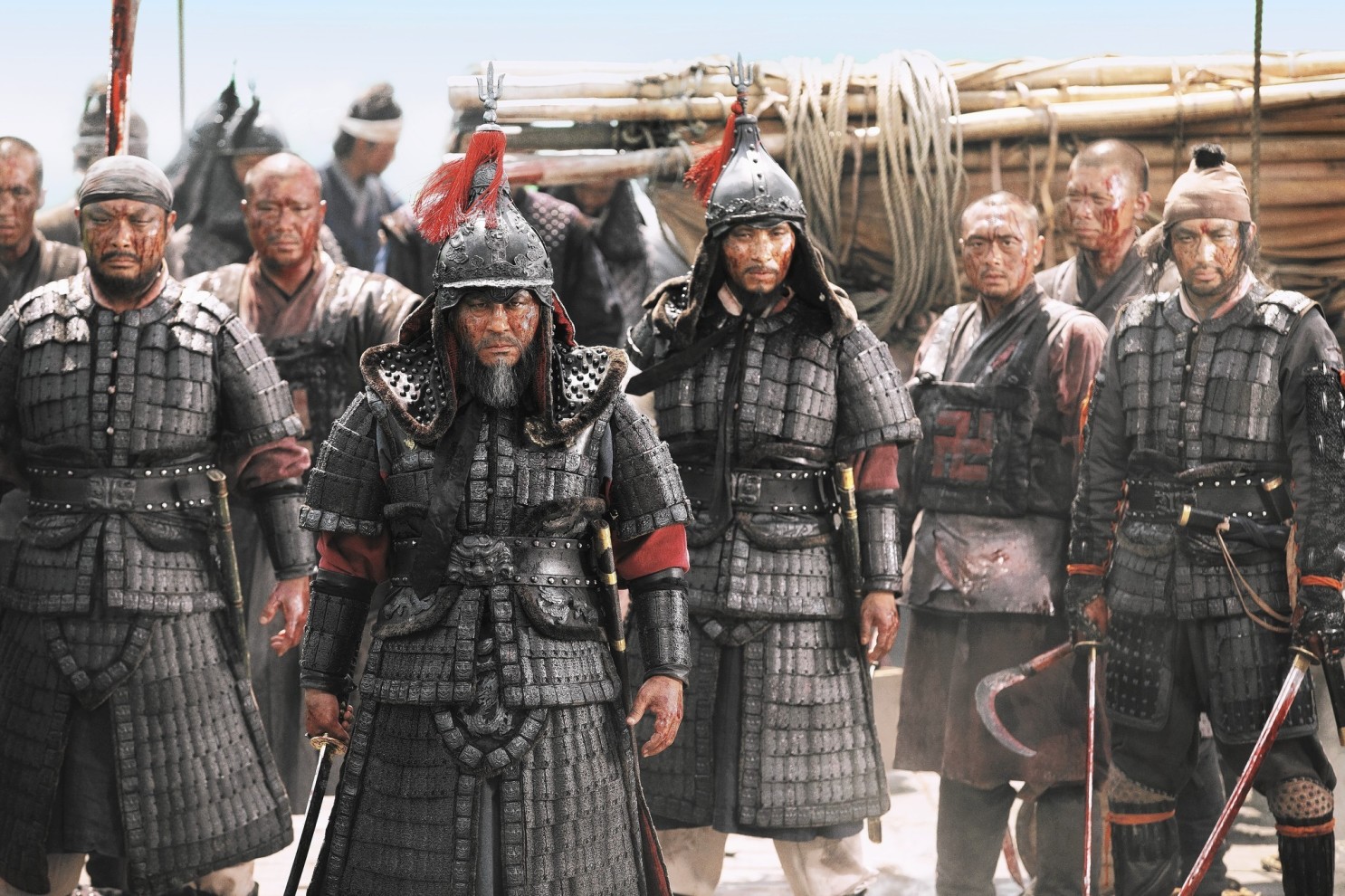 I don't have any interest in modern war films. I've never watched Saving Private Ryan, or Dunkirk, or most of the World War I / II / Vietnam war etc films. The only ones I've enjoyed watching that I can recall offhand are fantasy-esque ones like Captain America and Wonder Woman. Growing up, I've never understood why people find those films all that interesting. Science fiction war media is less of a hard sell: I enjoyed Star Wars, and binged highly tactical books like Legend of the Galactic Heroes, though the extremely long anime is too much for me.

Recently I've gotten into East Asian period drama war films, particularly Chinese and South Korean big budget movies. Love the costumes, the aesthetics, and the (admittedly likely exaggerated) ancient tactical warfare. Of them all, my favourite so far is The Admiral: Roaring Currents, a film about the Battle of Myeongryang, where Admiral Yi led his vastly outnumbered fleet into victory against a Japanese incursion. Gorgeously filmed with practical effects – some of the ships were built and actually floated out to sea for filming – it's a great watch if you can find it on your Netflix.

Another fantastic watch is The Great Battle, about the siege of Ansi Fortress vs the Emperor Taizong. Curiously enough, the most ??? tactical decision by Emperor Taizong was an actual thing, except even more petty in reality. Further, the true end of the Ansi siege was because the Chinese forces eventually ran out of food and had to retreat, but I guess that's not particularly cinematic.

Finally, if you're looking for a classic, there's always John Woo's Red Cliff, a two part film set within Romance of Three Kingdoms.

Daily Science Fiction has published my flash fiction Swappers [ Read here ], a short science fiction story inspired by things like AirBnB. Every year I submit increasingly weird bits and pieces to DSF, and each year I remain surprised and grateful that they keep supporting my work. Enjoy the story!

Due to Melbourne's continued lockdown until the end of October, I've been working my way slowly through the East Asian period drama catalogue. Notable exception for last month is Squid Game, a highly popular dystopian game TV series. Not sure if I'll continue watching since I'm not really in the mood for a long and depressing series, but for people looking for a tense SF watch, I highly recommend it -- it's on Netflix.

The Detective K series comprises of 3 hilarious films set in the Joseon era, featuring a nobleman detective who is also the son of the Prime Minister, and his trade magnate sidekick. Has a very Sherlock and Watson vibe, except with more chaos. Great watch, if only for the bromance and chemistry between the two leads, and the women in each film who have 0 interest in the MCs and 100% interest in personal vengeance / their careers.

Rampant is a Joseon-era zombie film, an entertaining watch about a disfavoured Prince who returns to Korea due to his late brother's last wishes, only to get embroiled in the fight against zombies / an attempt to seize the throne.

Set within the Manchurian invasion of Korea, War of the Arrows is a great martial arts film full of archery stunts. The ending's drama was entirely avoidable, and the FMC doesn't make great choices, but the film's action sequences were great.

Watch The Pirates for its great FMC captain character and its hilarious side characters, and try to ignore how annoying the MC is. Seriously, why is that man even in this otherwise entertaining show about Joseon-era pirate captains chasing down a whale that accidentally ate an Imperial seal.

Sadly, September has been another month where I've been unable to stop reading danmei, so here are some of my favourite reads from that month:

乔柚 | 被迫和残疾新帝成亲的日子 / Daily Life After Being Forced to Marry the Disabled New Emperor | This author loves their arranged marriage to a crossdressing MC sort of plotline – their other story, which has a nearly full translation (Forced to Marry the Enemy Prince) is an entertaining read. They write great stories with complex characters, though for this kind of plotline, the usual danmei trope warnings apply. This story's power dynamic works because the smart MC is very self-centered. No translation.

落孤 | [穿书] 拒为娘受 / I Reject Being a Shou | The straight brother MC transmigrates into a male prostitute protagonist character in his sister's danmei novel, and navigates the plot based on his knowledge of his sister's writing habits, all the while complaining about the various tropes that appear in her writing, as well as manipulating the plot based on his foreknowledge. Amusing read. No translation.

遥的海王琴 | 医刀在手（种田）/ Scalpel in Hand (Farming) | A modern surgeon transmigrates into the body of a descendant of an Imperial Doctors family that was condemned by the Emperor due to being framed for a mistake, decreed never to be allowed to practice medicine. As such, the MC becomes a butcher, but eventually his surgical skills win out. No golden finger, lots of face slapping. The most memorable thing about this book other than the interesting medical sections is how terrible the lives of the MC's married sisters are, especially after his family falls from grace: he spends most of the book largely trying to dig his sisters out of their horrific marriages. No translation.

绣生 | 冲喜［重生] / Chongxi (Rebirth) | Rebirth story where the MC decides to do a better job of getting along with the ill disfavoured prince husband he was arranged marriaged to, particularly after he was poisoned to death in his previous life. Great read for this genre, with a smart MC and ML slowly developing feelings, and a fun palace fight political drama. No translation.

且拂 | 暴君撩猫日常 / Daily Life of a Tyrant Raising a Cat | Rebirth story where the MC's soul mysteriously ends up in the body of the cat of an Imperial concubine for a few months while his real body is in a coma. Due to his pre-knowledge of the timeline, he helps save the ML out of a few terrible situations, and the ML becomes an intense cat servant. Lots of face slapping, cute and hilarious read with great palace politics despite its cracky premise. No translation.

雪山肥狐 | 穿越之妖妃攻略 / Transmigration into the Attack of the Enchanting Concubine | The MC transmigrated into the body of a new male concubine of a cruel prince, and decides to feign smallpox to get out of his estate, only to fall off the wall and onto the ML, the prince's brother. Many shenanigans, though you spend most of the first part of the story feeling sorry for the very hapless MC. No translation.

刘狗花 | 残疾战神嫁我为妾后 / After the Disabled God of War Became My Concubine | Transmigration story into the body of the Emperor's hated brother, who was forced to accept an enemy hostage general as a concubine. The prince MC was faking having broken sleeves: the other male concubines in his back yard are actually political advisors. However, the general doesn't know this, because the MC has a purposefully terrible reputation. Really entertaining read, liked how the much kinder MC manages to navigate a bad situation despite his poor health. Partial translation.

一只大雁 | 帝王的东北宠妃[穿书] / The Emperor's Favourite Northeastern Concubine ( Transmigration) | Funny read where the transmigrated MC is very good with the many different dialects in China, and ends up getting the other people in the palace (and the Emperor) to learn other dialects. Amusing palace read. No translation.

余小捌 | 暴君有个小妖怪 / The Tyrant Has a Small Monster | An innocent half-fox demon saves the emperor ML by mistake through a series of improbable coincidences, and gives the ML his 'life' pill to preserve his health. The pill was given to the MC by an immortal, who told him that he should treat it like his son. The MC takes this very literally, and spends most of the book accusing the ML (who left the mountain after recovering his memory) of running away while pregnant. Amusing read. No translation.

兔月关 | 我在暴君身边搞基建[系统] / I Built Infrastructure Beside the Tyrant [System] | This was a weird story where the transmigrated MC indeed spent most of the book concentrating on how to create infrastructure and improve education. Near the end, you realise the ML is most likely an AU of one of the most famous tyrants in history, Qin Shihuang... ... Most notable part of the book is the trading system, where the MC could trade with people from other universe systems, including interstellar and cultivation. This gave the MC a huge golden finger, often with hilarious side-effects. No translation.

遥的海王琴 | 我在古代办报纸 / I Ran a Newspaper in Ancient Times | Transmigration story from a modern reporter into the body of an idle prince who decides to run a tabloid. Surprising amount of court politics. The first part of the story was pretty funny, but once it runs into serious politics I found it less entertaining. No translation.

Are we really one month away from Nano? Damn.